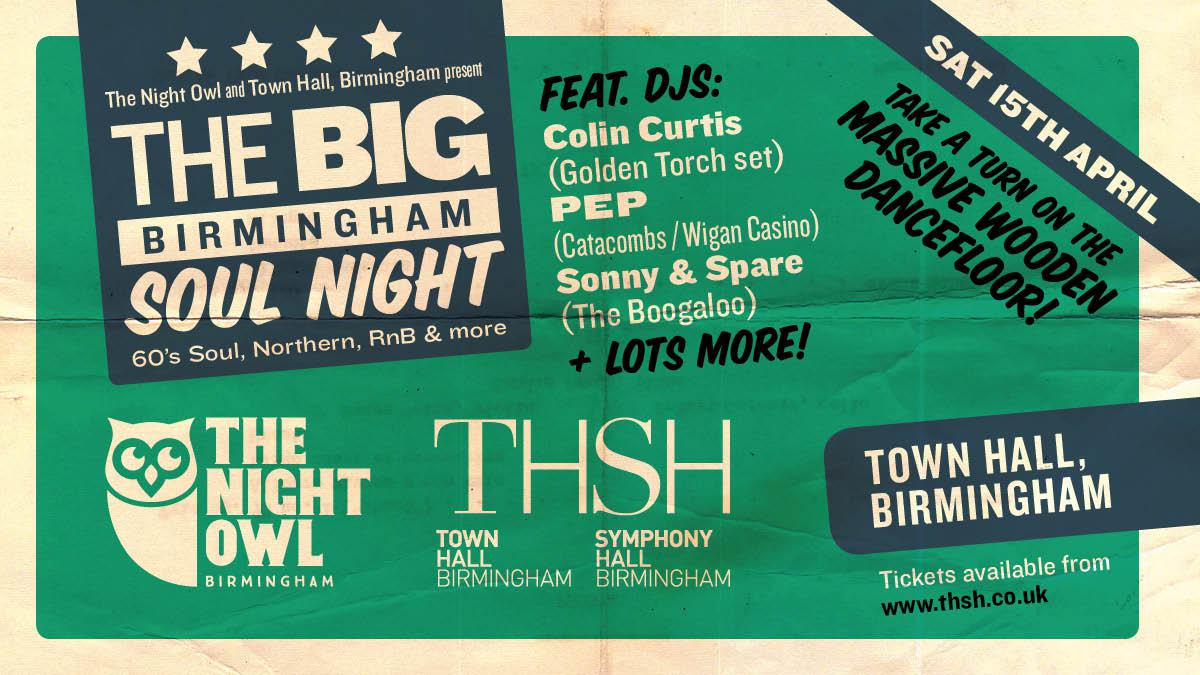 Town Hall Birmingham, one of the cities most renowned and historical music venues, has joined forces with a relative newcomer, The Night Owl. Voted Best New Venue by Birmingham Mail readers last year, The Night Owl and Town Hall are working together to bring The Big Birmingham Soul Night on Saturday 15 April, from 9pm – 4am.

The event, which harks back to the soul nights of the 60’s and 70’s, will be programmed by The Night Owl and held at Town Hall Birmingham. This beautiful listed building boasts a giant wooden floor, perfect for Northern Soul and Mod style dancing, with an elegant balcony for those who would prefer to just relax and enjoy the dancing below. There will also be a smaller second room of music, with its own bar and seating, record buying and selling and more.

We are really excited to join forces with The Night Owl in what we know will be an unmissable night. Town Hall was purpose built for Midland’s audiences to enjoy and dance to music, with the likes of Led Zeppelin and Bowie having graced the stage for incredibly high energy standing performances. It will be fantastic to have a taste of that again at Town Hall. With the ever growing popularity of soul events in the city, The Big Birmingham Soul Night is likely to sell out so grab your tickets while you can!

Confirmed to head up this evening is legendary DJ Colin Curtis, who began DJing in the late 1960s at the Crystal Lake Ballroom and the infamous Golden Torch in Stoke, and later Blackpool Mecca. He is often cited as being one of the most important tastemakers of black music in the UK. Colin will be playing music from his Torch days, so you can expect the Northern Soul classics that Colin broke and much more, all on original vinyl.

We are delighted to be working with Birmingham Town Hall, it reminds me of the places I used to go to as a teenager with the large main hall and wooden floor, it really fits the ethos of the Northern Soul scene. The soul fans are going to love it!

Kev Richie (March of the Mods)