Yumi and The Weather – Heads to Birmingham this September 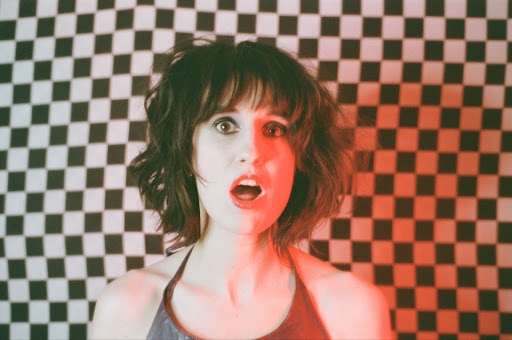 A cautionary tale for the brave, the latest from the creative voice of Ruby Taylor is an ensnaring electro/punk proposition inspired by a series of real-life events that almost had the most calamitous of outcomes.

A song about recklessness and regrets, fate and fortune, loneliness and a longing for love, its suggestive lyrics construct a troubling narrative of a near-miss only narrowly evaded. “Let’s drive straight into the fog, All I know is this isn’t love,” lulls Yumi with all the dreaminess of someone sleepwalking into a cul-de-sac, “This could be the last road that I take, No time to go back or contemplate…”

Of “Can You Tell”, Yumi AKA Ruby explains:

Can You Tell’ was inspired by a very impulsive decision… It could have been the biggest mistake of my life, but luckily it was absolutely fine. This song came out of the sadness from feeling the fear I felt that overcame me when I realised I was no longer in control. Thoughts of what could happen came into my head, and I thought about what I was doing and had to have some words with myself. I lived and learnt that life is not a dream where I can just wake up when it goes bad, so I slowed down after that because trust is something you build in time, and presumption is the mother of all F*** ups!

With a laissez-faire cool somewhere between Sonic Youth and Yeah Yeah Yeahs, “Can You Tell” creates a joyride of veering sonics and compulsive rhythms that will fasten you in tight and refuse to let-go until the road runs out. The track received its first play on BBC6 Music’s breakfast show as Lauren Laverne’s ‘While You Were Sleeping’ pick today.

Written, recorded, produced and performed (Vocals, Guitars, Synth, Bass) almost in its entirety by Ruby Taylor AKA Yumi And The Weather, additional drums were laid down by William Woodfine. Additional mastering was added by Kevin Tuffy at Alchemy, London.

“Can You Tell” is the follow-up to the BBC6 Music and Radio X supported recent single: “It’s All In My Head”, with the latter track forming the title for Yumi And The Weather’s long awaited second album.

Confirmed for release on Friday 23 September via Miohmi Records, ‘It’s All In My Head’ promises 10 tracks of illuminescent indie-rock that readily defy convention at every juncture. At turns tumultuous and others triumphant, these are rollercoaster songs that will take you through the highest highs to lowest lows and spiral through every esoteric corkscrew on the way through.

Since emerging onto the music scene with her dynamic sound and defiantly open songs over 8 years ago, Yumi has toured with the likes of Sea Power and performed at festivals across the UK including Green Man, The Great Escape and Shambala. Her self-titled debut album garnered praise from BBC 6 Music, Radio X, Clash, The Line of Best Fit, DJ Mag and more, with one of her tracks recently featured in the BBC hit drama series ‘Normal People’.

Returning to the spotlight in the Autumn of 2022, Yumi And The Weather’s first studio album release in over 4 years promises to be every bit worth the wait.

Edifying and electrifying, ‘It’s All In My Head’, will be released on 23 September 2022.