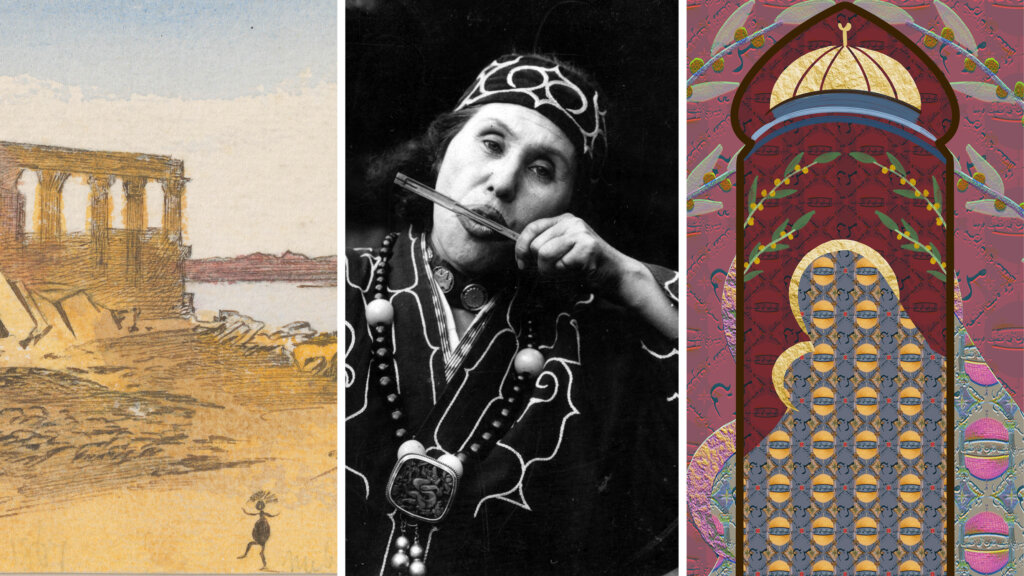 Ikon presents Edward Lear: Moment to Moment, the first exhibition dedicated solely to Edward Lear’s landscape sketches, running 9 September – 13 November 2022. It comprises 63 works – many exhibited for the first time – borrowed from various private and public collections, including the Yale Center for British Art, Houghton Library at Harvard, Tate, the Gennadius Library and the Ashmolean Museum. Tracing journeys made by this prolific artist, author and nonsense poet through Europe, the Middle East and India across many decades, the exhibition reveals Lear’s compulsive drive to depict and evoke the present through his in-situ drawings.

Skinure – Let me live, by Japanese Ainu artist Mayunkiki, considers the everyday life of her people, the Indigenous inhabitants of Hokkaidō.

Born in 1980 in Asahikawa, on the island of Hokkaidō in Japan, Mayunkiki’s artistic practice arises from her Indigenous identity. Through a variety of works, this exhibition conveys the predicament of her community in recent times. Like many ‘First Nation’ populations, the Ainu have suffered systematic marginalisation by a central government and Mayunkiki is
especially concerned to raise the profile of their traditional culture, including Sinuye (traditional tattooing practice for Ainu women, banned by Japanese law) and Upopo (traditional Ainu music rooted in rhythmic patterns and singing in a trance-like chorus). On the walls throughout the exhibition are a number of historical family photographs – to illustrate literally where Mayunkiki is coming from – and also handwritten observations, in English, made by her.

Women in Paradise, a presentation of new work by Birmingham-based artist Farwa Moledina, is a study of the four women promised paradise in Islamic tradition.

Ikon shows a new work, Women of Paradise (2022) by Birmingham-based artist Farwa Moledina (9 September – 13 November 2022). It is a study of the four women promised paradise in Islamic tradition, including Maryam (a.s), mother of Isa (a.s), otherwise known as Mary, mother of Jesus.
Farwa Moledina’s work is often a study of female Muslim identity. She is interested in how the western historical art narrative portrays the Muslim woman, and whether this has impacted ways in which Muslim women are viewed in the contemporary world. Presented in Ikon’s Tower Room, Women of Paradise is a response to the singular religious narratives that dominate museums and galleries. Built on principles of neutrality, these
spaces rarely contain depictions of Mary outside of the Christian imagination. Moledina’s.