A Day’s Record Shopping in Brum! Many record shops have graced the streets of Birmingham since the popularity of the gramopohone, always catering for the latest music trend. Whether it be indie, pop, classical, jazz, or more underground music genres such as hip hop, soul, reggae and dance, there has always been an outlet bringing vinyl, cassette and CD into the city. 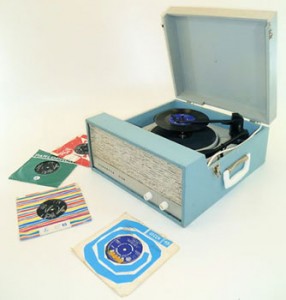 Not many people will realise that the first man-made plastic (later known as celluloid) was invented in Birmingham by Alexander Parkes in the mid 1800s. Plastics have played a huge role in the history of record production ever since.

The city also became home for the Birmingham Sound Producers Company in the 1930s. BSR turntables were later used in the famous Dansette record player which became a household word in Britain during the 1940s and 50s. BSR supplied turntables and autochangers to most of the world’s record player manufacturers, eventually gaining 87% of the market.

However, the rise of digital audio formats has led to a worldwide decline in vinyl and CD sales. From small independents to huge corporations.

It would be plausible to believe that the digital download age has wiped out traditional record shops completely, but this is not the case. Record shoppers who keep specialist music stores alive today range from dedicated enthusiasts to occasional browsers. 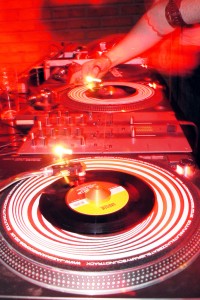 Some will argue that vinyl is still an untouchable audio format due to the analog way in which vinyl discs record and play back the sound.

Local DJs (at venues such as The Yardbird, Hare & Hounds and Lord Clifden) still play ONLY vinyl, while many continue to use twin turntables, mixing between vinyl and a new hybrid digital technology called Traktor or Serato.

The true record enthusiast will pay hundreds for quality turntables thus maximising the audio experience. Record labels often release limited edition vinyl 45s or LPs of new artists to add to the hype and collectibilty of an artist. Other labels manufacture high grade reissue LPs of classic albums from the 1960s onwards to further enhance the audio playback.

Each year there are new reports of how vinyl records are making a comeback such as this one on the BBC. The truth is vinyl records and a select nucleus of stores around the world continue to trade regardless of peaks-and-troughs in music sales on every format.

Here’s a current list of record stores in Birmingham which you may be familiar with, and if not, why not drop by next time you’re in the vacinity, the colourful album sleeves will have you pulling out the LPs before you know it, you may also want to look out for national Record Store Day: 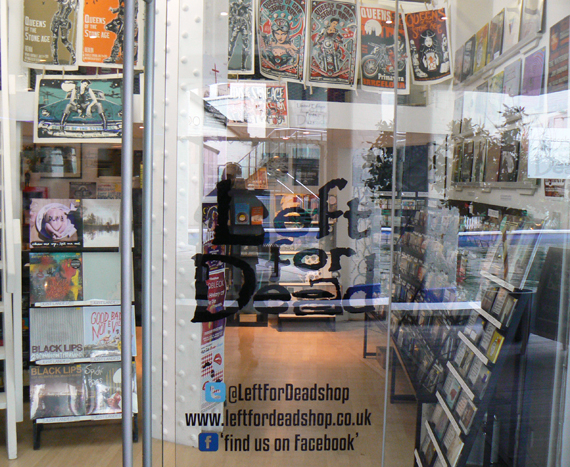 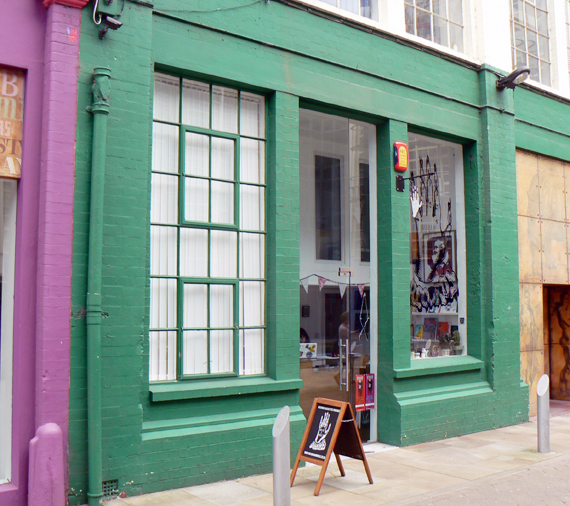 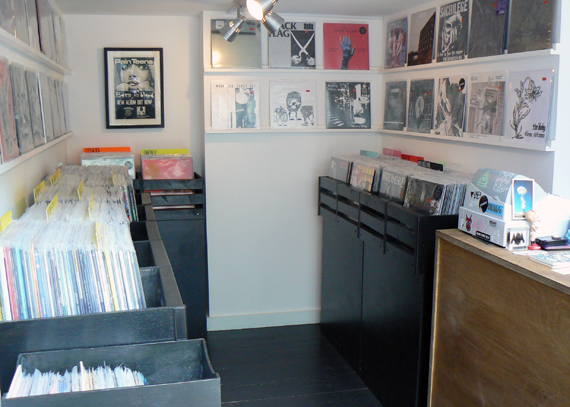 Trading since 1979, Swordfish Records is Birmingham’s most established indie record store, having survived three moves and four premises to its present home just off Corporation Street. The record store has played a huge role in Birmingham’s music scene since its conception. Swordfish’s record label has also been instrumental in a wider UK music scene promoting bands such as The Lilac Time and seminal acid house classic ‘Jesus Loves The Acid’ by The Ecstasy Club in 1988. 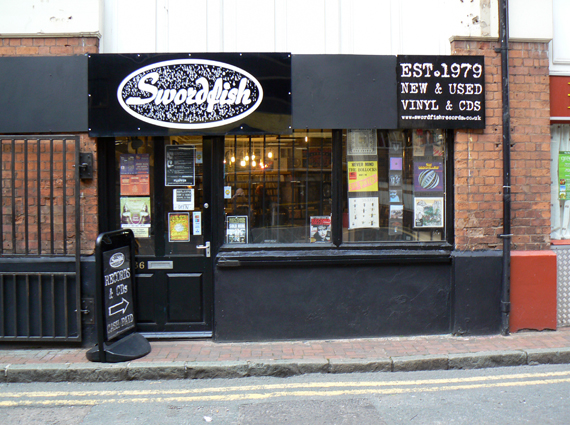 When the popular Tempest Records sadly closed its doors a few years ago, Rich Perry (from Tempest’s hardcore/indie floor) decided to set up a much smaller affair within the Oasis Indoor Market along with a business partner. They specialise in selling new releases and backcat vinyl, cd’s, tickets, indie, metal, hardcore, punk, industrial and goth. The record store is on level 2 of Oasis and stocks music from the USA and UK. Rich also runs his own record label, Speedowax Records. Ignite Records, Level 2, Oasis Indoor Market, 110-114 Corporation Street, Birmingham, B4 6SX. Phone: 0121 233 4488 The Diskery is Birmingham’s oldest surviving record shop. The store opened in 1952 and has been supplying music in the city ever since. They stock a diverse range of secondhand and rare vinyl records – including 78rpm jazz and swing. The Diskery also deal in vintage wind-up gramophones and accessories.

The store is a welcoming place to visit and is great for record diggers and music enthusiasts alike. You can enjoy a cup of tea and a natter, then browse the records with a stash of oddball curisoities which fill up every space. The Diskery, 99 Bromsgrove Street, Birmingham, West Midlands B5 6QB. Phone : 0121 622 2219 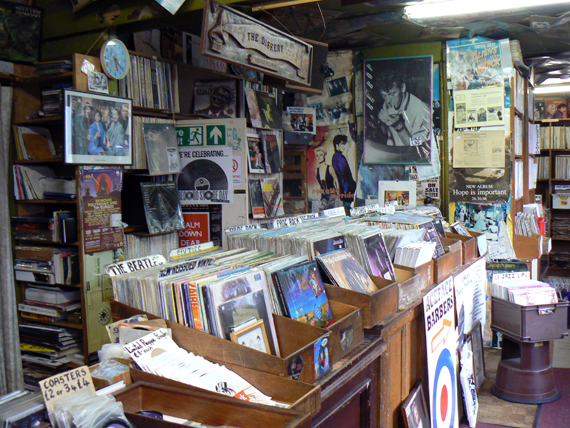 The Music and Video Exchange

There are loads of second hand bargains due to their reduction system where stock is reduced periodically so the longer it stays in the shop the cheaper it may be. The Music and Video Exchange, 8 Smallbrook Queensway, Birmingham, B5 4EN. Phone : 0121 632 6262 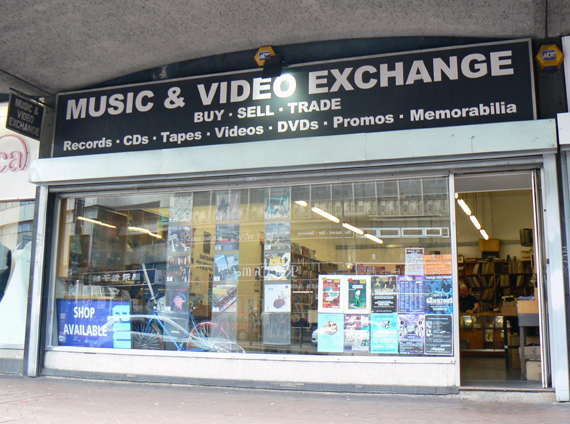 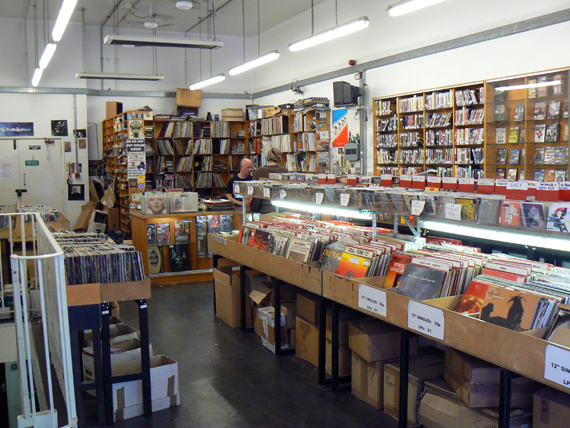 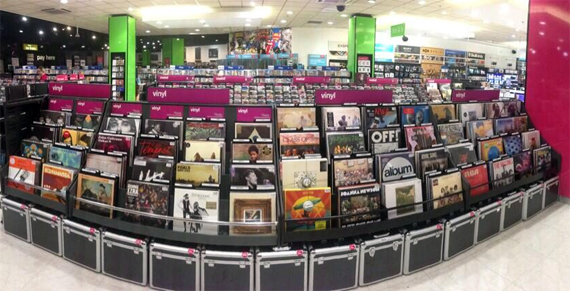 HMV has had its ups and downs and with roots firmly placed in vinyl records, it’s great to see the HMV store in the city centre stocking new vinyl again, it seems fully committed and not just a token gesture.

The vinyl now takes up a whole section of the shop with LPs from all genres and some surprising titles in stock. Not quite an independent but this is definitely worth a mooch if you are spending a day record shopping in the city. There are several racks along with record boxes and there’s the obvious CD aisles. HMV, Bullring, Birmingham, B5 4BE. Phone: 0121 654 9210 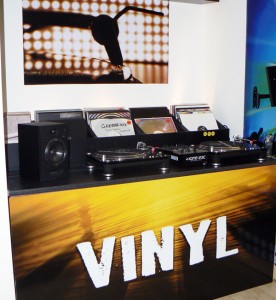 Dj Tech Direct has been established for the last 3 years, in the heart of Birminghams quirky Custard Factory. It was launched as a mainly internet based store, with the ability to visit the premises and get a hands on feel of the products on offer.

As the shop became more and more popular, the same question was kept being asked by djs visiting “where can we buy vinyl in Birmingham?”.

The answer was “well, nowhere if its house music”. So they decided to fill the gap and specialise in stocking underground house, nu disco and techno, that is predominantly ‘vinyl only’. It’s currently a small selection but carefully selected with some well known dance music DJs dropping by. 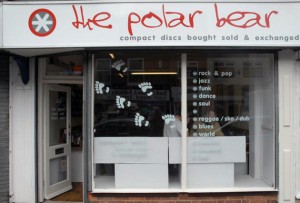 Polar Bear Records is a small independent record store situated in the Kings Heath area of the city. The store has been trading since 1991 and specialises in jazz, avant rock, classic rock, metal, prog & kraut rock and folk. 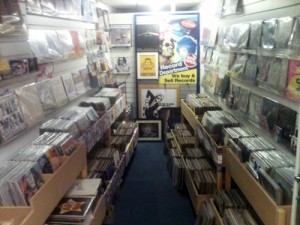 If you’re passing through East Birmingham, Traxx Records has appeared on the record collectors radar. Located inside Entertainment World, Traxx offers a large choice of records covering all genres from reggae to dance, 60s and indie. 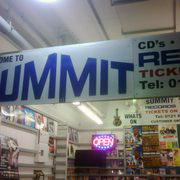 Summit is Birmingham’s longest established reggae record store which started life in the old Bull Ring shopping centre. Today, there is a small shop on the Dudley Road and a main store located within the Bull Ring Indoor Meat & Fish Markets (situated next to the toilets).

Summit Records market stall stocks mainly reggae CDs, DVDs, posters and tickets for music and comedy events. There is still a large availability of reggae vinyl which can be accessed on request. The vinyl is not currently on display due to space restrictions but this may change in future. Summit Records, 130, Indoor Markets, Bull Ring. Phone: 0121 6221158