Published by Sally Jones On May 10, 2016 Leave a response 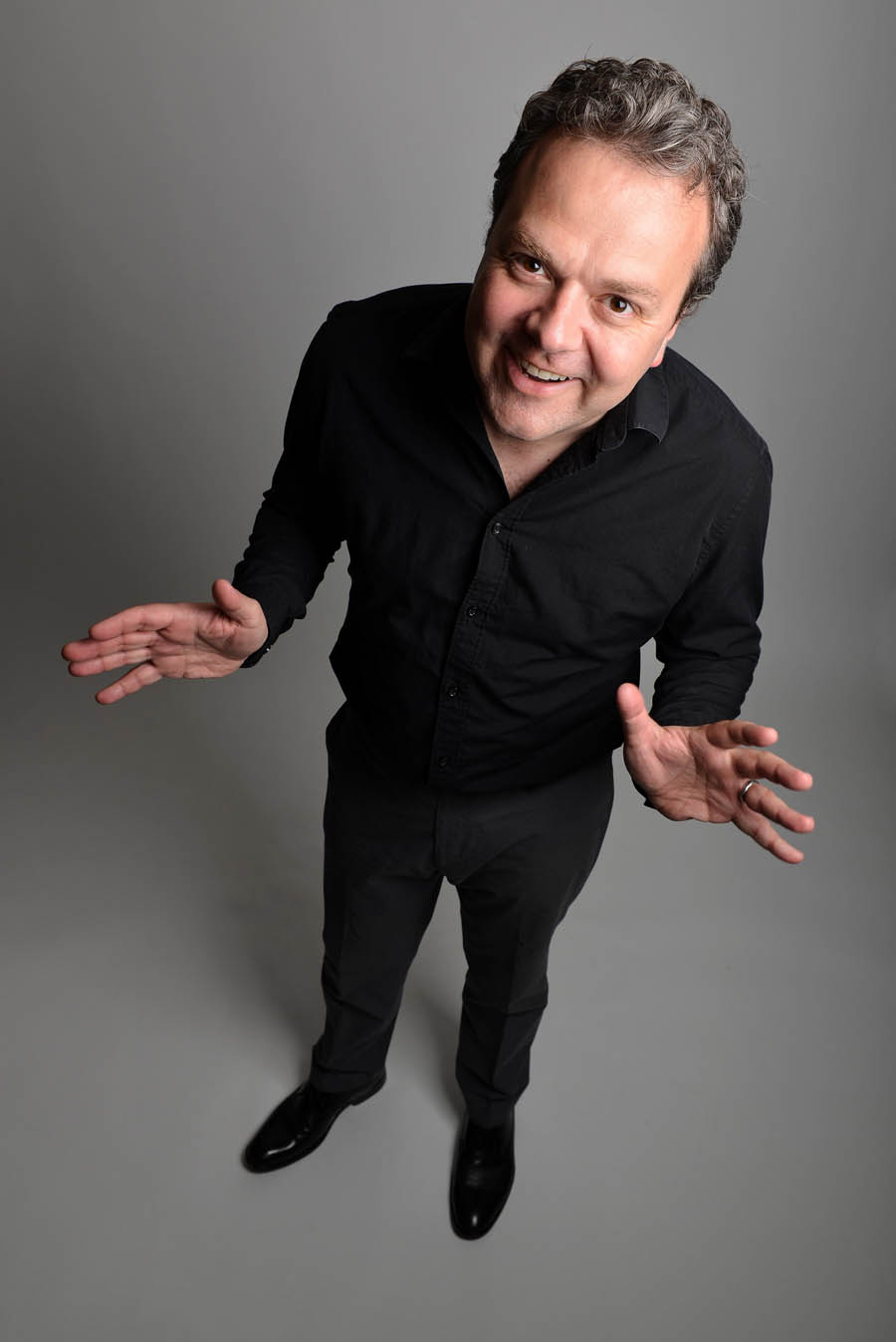 Comedian Hal Cruttenden is currently touring the UK after returning from Australia with his new tour. Sally W-Jones caught up with him to chat about shocking comedy, getting attacked after gigs and the stress of TV.

“A lot of my stand up is me trying to prove that I’m more unpleasant and nastier than people think I am,” Hal says. He certainly has a reputation for being one of the friendlier comedians. Popping up on the Great British Bake Off – Extra Slice with Madeira cake isn’t going to do much to make his image a bit grittier. The title of his current tour is a bit more in line with his aim, however.

“It’s called Straight Outta Cruttenden based on me starting to listen to gangster rap last year again. The album Straight Outta Compton by NWA is something I talk about, someone gave it to me when I was 19 and I’m not a massive rap fan at all but I started to listen to again and I realised it was sort of a clue to my mid-life crisis.”

When we speak Hal has just got back from Australia, before kicking off the UK of his tour in May.

“I love the fact that there’s always something new coming into the show, there’s always new material, so that’s sort of keeps me going. I really enjoy it…touring and doing your own show is why anybody gets into stand up, it’s the number one thing we like doing, much more than panel shows. It’s about the live experience. And the most fun is when you’ve got your own audience there.”

Despite his love of touring and his audiences, Hal is socially more of a shrinking violet than you might expect.

“I would describe myself as quite shy. Victoria Wood said something about this, I thought God she nailed it completely; most performers are more likely to be shy than not, because what you’re doing as a stand up is you’re constructing a way of controlling a big social situation. I think it’s really true.”

“I’m not as socially awkward as I was when I started out acting. I got into stand up through meeting someone. I was doing traffic reports for the BBC, as lots of actors are, and I met somebody there who said you should try stand up. And I first of all got into it thinking this will be a good way of writing one man shows and doing one man performances and then I completely got addicted to it.”

That addiction has driven Hal through some pretty scary situations. “I was sort of young and fresh faced and ready to take it, but I was thrown against walls, I was threatened, eight times I was attacked. That was unusual, other people didn’t seem to get as attacked as I was. I think I wound something up in a certain sort of man.”

Stand up comedy, while it’s not “being a soldier” as Hal remarks, is still a difficult career to follow, with young comics, almost literally in some cases, being dragged over the coals when they start out. And Britain is not the easiest place to learn the trade.

“Britain, I’d say, is one of the hardest places to learn to be a stand up because you have such a strong drinking culture in clubs and you are going to get heckled and shouted at and have horrible things said to you.”

Londoner Hal has toured throughout the country. I wonder if he’s noticed a North-South divide in the way audiences react to him?

“It’s more a London and out of London divide, more than North-South,” he says, adding, “I think what’s happening in the country is making it harder to be a Londoner, because I think London is a completely different country. Just the whole expense of it and the price of houses and everything that’s just so different now to the rest of the country, so I think that’s almost the biggest divide, rather than North-South.”

“I find if I put myself down quickly, it’ll all be fine whatever I am, as long as they know where you’re coming from. That whole myth about Glasgow being tough, Glasgow is one of best places for comedy I’ve ever played. If you go on and you’re blatantly rude to Scottish people they bloody love it.”

“There’s quite a warmth you learn from travelling the country. The places I think I’m going to have the biggest conflict seem to be the nicest places to play.”

It’s not always nice, however. People are quick to judge someone trying to be funny.

“Comedy’s very visceral,” Hal says. “When people think someone’s not funny they think they’re not funny for everybody, they don’t understand why other people are laughing. They don’t get that comedy’s quite subjective so people get very strong about disliking. People either love comics or they hate them I think, because if someone doesn’t find you funny they find you annoying,” he explains.

As well as annoying, audience can also find you offensive. The wrong joke can get you into serious trouble nowadays. But Hal is not convinced that contemporary comedians are making jokes that are any more shocking than they ever have done.

“Maybe it’s because we didn’t have the Internet but we sat laughing in the 70s at jokes about gay people, black people, women, mothers in law, and everybody thought oh it’s the way they are. Actually those were jokes that were bullying a large section of the population.”

“People tend to look for offence in comedy,” he adds. “I don’t think we’re anymore offensive than we’ve ever been. I think, someone like Frankie Boyle is seen as shocking as does over step the mark sometimes I think, but he’s also brilliant as a comedian. I think people reacted to the sort of post we’ve got to stop being racist and sexist, but now people who actually aren’t oppressed in society particularly are now looking to be offended. So Christians have suddenly piped up going well you don’t make jokes about Muslims, because you’re the majority religion still. People look to be offended and in a way they’ve never done before and everybody’s become much more precious.”

“I’m not nearly as shocking as Frankie Boyle, I’d love to be, I haven’t quite got the guts.”

TV is a different animal from live shows altogether, and it proves Hal’s point that context is everything. “I’ve got things I’d not say on TV because it makes me sound like a bastard,” he says. For example, he mentions joking about wanting to be so famous as a comic he can do the sad stuff from Africa on Comic Relief. “That gets a very big laugh in my set, those sort of things, you just judge where you put them [on TV] or if you say them or not.”

“TV is…some things are great fun, you know, some things you do really look forward to. It’s the pressure of TV. Live shows it’s just the fact that it’s completely live, you can control what’s going out. TV, you’re being edited by someone.”

“Also with TV you’ve got a much shorter period to put across something. If you’re doing a group show like Live At The Apollo or Mock The Week, you feel a bit more tension because you want to come across well and you’re not sure what’s going to be used and what isn’t. When it’s your show, when it’s you doing it you just have complete control, that’s they joy of it. So it’s a matter of control, I’m a control freak.”

“TV is fun to do, it’s dangerous as a comic. I’ve done stuff on TV when my wife’s gone ‘I can’t believe you said that about me’, I went ‘I had to get a laugh in!’ So it’s a bit of a liability. That’s why it’s such a release to be on tour to do your own show.”

Hal’s tour Straight Outta Cruttenden is at The Old Rep on Saturday 14 May. www.halcruttenden.com