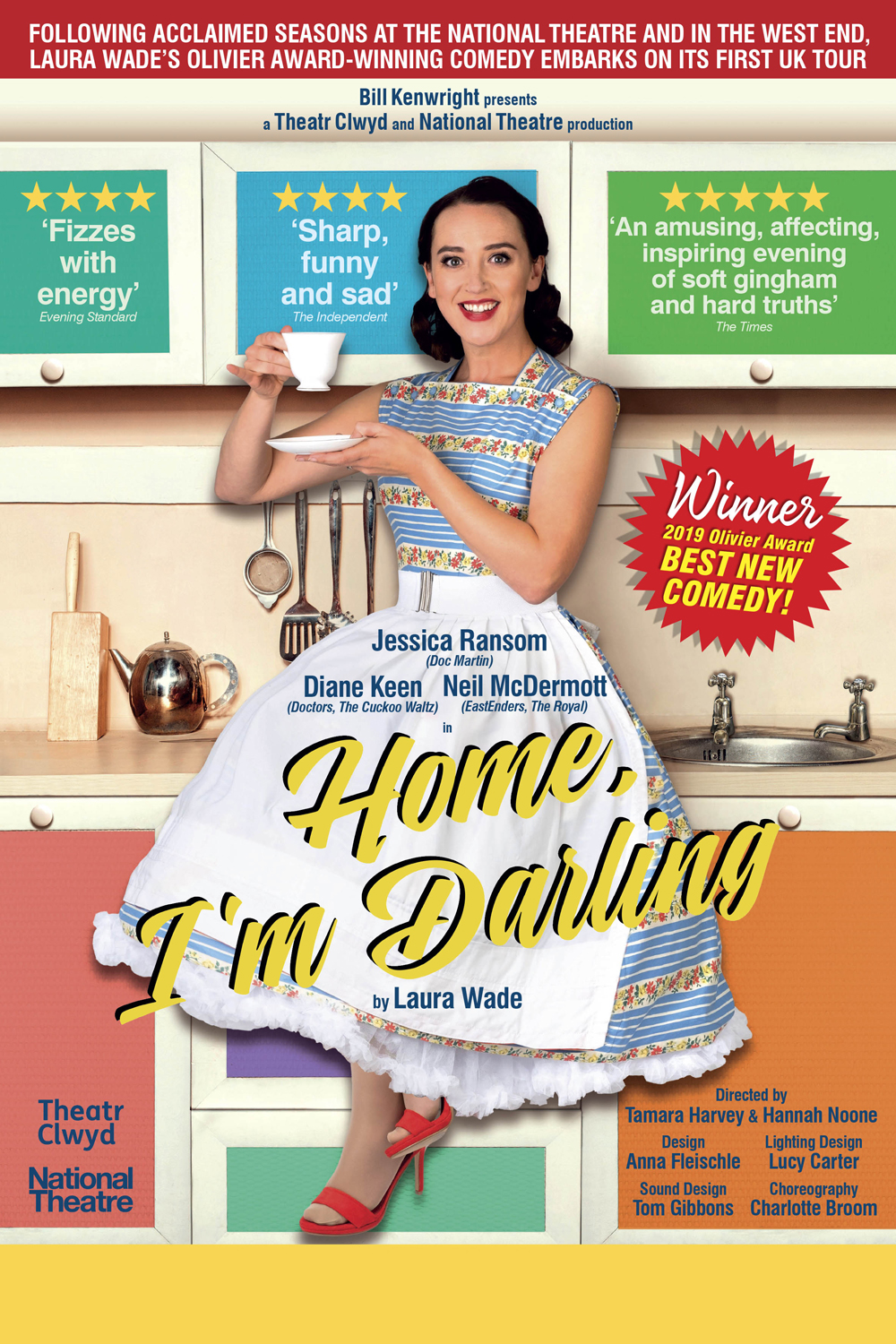 Bill Kenwright presents a Theatr Clwyd / National Theatre production of Laura Wade’s Home, I’m Darling, winner of the 2019 Olivier Award for Best New Comedy and directed by Tamara Harvey and Hannah Noone. This new production of Home, I’m Darling will arrive at The Alexandra Birmingham from 25 to 29 April 2023.

Leading the cast are BAFTA award winner Jessica Ransom (Doc Martin, Armstrong and Miller, Horrible Histories) as Judy, Diane Keen (Doctors, The Cuckoo Waltz) as Sylvia and Neil McDermott (Eastenders, The Royal) as Johnny, with further casting to be announced. This sparkling, thought-provoking comedy by Laura Wade (Posh/The Riot Club) is about one woman’s quest to be the perfect 1950s housewife.

Every couple needs a little fantasy to keep their marriage sparkling. But behind the gingham curtains, things start to unravel, and being a domestic goddess is not as easy as it seems…

Home, I’m Darling received its World Premiere at Theatr Clwyd in 2018, before playing at the National Theatre and then transferring to the Duke of York’s Theatre in the West End, winning the 2019 Olivier Award for Best New Comedy. This production reunites the entire original creative team, led by Theatr Clwyd Artistic Director and Co-Director Designate of the Royal Shakespeare Company, Tamara Harvey. It is co-directed by Hannah Noone, with design by Olivier award-winner Anna Fleischle, lighting by Lucy Carter, sound design by Tom Gibbons and choreography by Charlotte Broom.

Jessica Ransom (Judy) is most recognised for her role as Morwenna Newcross in ITV’S Doc Martin. Her TV credits are extensive and include series regular roles as Jess in Zapped, and Polly in Our Zoo. She has also appeared as various historical characters in the BBC TV series Horrible Histories, for which she won a Children’s BAFTA, and is a writer for Series 9 and Series 10. Guest leads include Defending the Guilty, The Escape Artist, The Armstrong & Miller Show, A Saucerful of Secrets, C-Bomb, 30 & Counting and The Outsiders.

On stage, her credits include Laura Wade’s Posh at the Royal Court and Duke of York’s Theatre, Straight at the Crucible Theatre Sheffield and her own show Jessica Ransom: Unsung Heroes which she performed at both Leicester Square Theatre and the Edinburgh Fringe. Jessica has also worked extensively for BBC Radio 4 and appeared as Drusilla in Horrible Histories the movie. She can next be seen in the feature film The Statistical Probability of Love at First Sight, which is due to be released on Netflix this year and can be seen on the final series of Doc Martin for ITV. She is currently filming the next series of Horrible Histories.

Laura Wade (Writer)’s play Home, I’m Darling won the 2019 Olivier award for Best New Comedy. In 2018 she adapted Jane Austen’s unfinished novel The Watsons for Chichester Festival Theatre,and in 2015 she adapted Sarah Waters’ Tipping the Velvet for the stage. The play premiered at the Lyric Hammersmith before transferring to the Royal Lyceum in Edinburgh.

Laura’s screenplay The Riot Club, an adaptation of her 2010 stage play Posh, premiered at Toronto International Film Festival 2014. It opened in cinemas in September 2014. The film is directed by Lone Scherfig and stars Max Irons, Sam Claflin and Douglas Booth. Posh opened in the West End at the Duke of York’s Theatre on 11 May 2012, after the original production opened at the Royal Court Theatre in April 2010 to sell out audiences.
In November 2010 her play for voices, Kreutzer vs Kreutzer, was performed as part of a concert by the Australian Chamber Orchestra featuring music by Beethoven and Janacek, on a national tour of Australia, including the Sydney Opera House. Laura’s play Alice, a new adaptation of Alice in Wonderland for Sheffield Theatres opened in June 2010. Her play Other Hands premiered at Soho Theatre in February 2006 to enormous acclaim. Laura’s play Colder Than Here premiered at Soho Theatre in February 2005 followed shortly afterwards by her Royal Court Theatre debut Breathing Corpses – both of which won rave reviews. Laura was subsequently joint winner of the prestigious George Devine Award 2005.

In 2006 Laura won the Pearson Most Promising Playwright Award and was nominated for an Olivier Award for Outstanding Achievement in an Affiliate Theatre for Colder Than Here and Breathing Corpses.

Tamara Harvey (Director) is currently the Artistic Director of Theatr Clwyd and the Co-Artistic Director Designate of the Royal Shakespeare Company. She has directed in the West End, throughout the UK and abroad, working on classic plays, new writing, musical theatre and in film. Her production of Home, I’m Darling in co-production with the National Theatre transferred to the West End and was nominated for five Olivier Awards in 2019, winning Best New Comedy. At Theatr Clwyd she has also directed the premieres of Isla by Tim Price (and the subsequent film version for the BBC), Emily White’s Pavilion, Pilgrims by Elinor Cook and Peter Gill’s version of Uncle Vanya (co-produced with Sheffield Theatres), for which she won the Wales Theatre Award for Best Director. In 2020 and 2021 she directed screen versions of What a Carve Up! and The Picture of Dorian Gray adapted by Henry Filloux-Bennett. Most recently she directed The Famous Five, a new musical in co-production with Chichester Festival Theatre.

Lucy Carter (Lighting Designer) is a multi–award winning, critically acclaimed lighting designer. She was awarded the 2018 Critics’ Circle National Dance Award for Outstanding Contribution to Dance. She is a two–time winner of the prestigious Knight of Illumination Award for Dance for Chroma (2008) and for Woolf Works (2015), winner of the 2013 TMA Achievement award in Opera for Lohengrin and the 2004 Olivier Dance Award for 2 Human.

Her other credits include: lighting design for Gareth Pugh’s Women’s Collection in London Fashion Week 2017 and 2019, and Paloma Faith’s performance at the Brit Awards 2015.

Her TV credits include: Humans (Channel 4)and So You Think You Can Dance (BBC) (assistant choreographer).