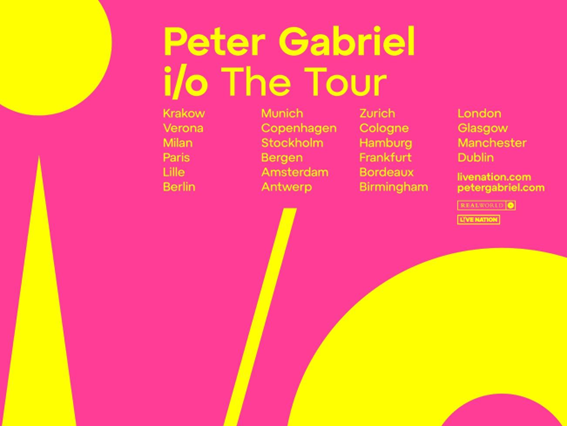 Peter Gabriel has announced plans for his 2023 tour across the UK & Europe next spring. The tour marks his first solo shows outside of North America since 2014’s Back to Front Tour celebrating the era-defining album So. Produced by Live Nation, the 22 shows in Europe will kick off in Krakow, Poland on 18 May 2023, with dates in Italy, France, Germany, Denmark, Sweden, Norway, The Netherlands, Belgium, Switzerland, and the UK before wrapping in Dublin, Ireland on 25 June 2023. The tour will then continue in North America in the late summer/fall with dates and ticket information to follow.

i/o – The Tour will see Gabriel playing new material from his forthcoming album i/o, as well as delving into his peerless catalogue of music, with hits, fan favourites and the unexpected. For the shows, Gabriel will be joined by regular band-mates Tony Levin, David Rhodes and Manu Katché. Full details on the i/o album will follow.

Peter Gabriel said of the tour: “It’s been a while and I am now surrounded by a whole lot of new songs and am excited to be taking them out on the road for a spin. Look forward to seeing you out there.”

Tickets go on-sale to the general public on 11 November 2022 at 10am GMT at  www.ticketfactory.com

Peter Gabriel first came to international prominence with the success of Genesis, a band that he co-founded while still at school. Since leaving Genesis in 1975, his recording career has included eleven studio albums, film soundtracks for Alan Parker’s ‘Birdy’, Martin Scorsese’s ‘The Last Temptation of Christ’ and Philip Noyce’s ‘Rabbit Proof Fence’ as well as numerous live albums. His wider musical career has included multiple Grammy Awards, the world-renowned Real World Studios, the formation of the Real World Records label, and in 1980 the creation of WOMAD, the festival that has launched the careers of many artists from around the world and has just celebrated its 40th anniversary.

Peter Gabriel co-founded the human rights organization WITNESS (Witness.org) in 1992, the organization that pioneers the use of cameras and technology in human rights campaigning, and in 2007, alongside Sir Richard Branson, he founded The Elders (theelders.org) which was launched by Nelson Mandela.  In 2006, Peter Gabriel was awarded the prestigious Man of Peace title by The Nobel Peace Laureates and in 2008 was also included in the Time 100 list. He has been inducted into the Rock & Roll Hall of Fame twice. He remains engaged in a wide variety of tech-based businesses throughout a variety of creative industries.