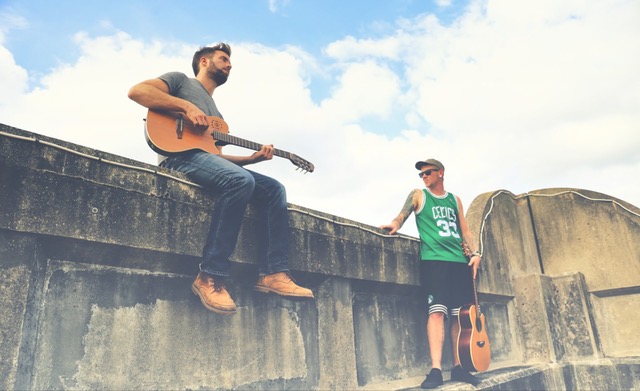 Young British musicians Mikhail Asanovic and Jake Wright — known together as The Showhawk Duo —  have dazzled audiences worldwide with their spectacular approach to playing the guitar. With a style that has broken down barriers between acoustic and electronic music, the group are spearheads of the UK music scene, and have been tipped as visionaries for their unique playing skills. Whether playing old-school trance classics or modern funky house their live show knows no boundaries, leaving anyone who listens amazed by their range.Mik is a classical guitarist at heart, having studied at Manchester’s RNCM, whereas Jake is an electric junkie playing in rock and metal bands while growing up. Mik’s classical foundation shines through in the music with Jake’s raw percussive approach always keeping the crowd moving. When combined together, they create a truly unique and impressive act that has caught the attention of industry giants. The group have been featured everywhere from BBC Radio 1 to the main stage at Glastonbury and regularly play sold-out venues. However, a truly career defining moment was when they The O2 Forum during their previous tour, where they received rave reviews.Now, the group will return to the stage as they embark on their UK headline tour this November and December.

Once again bringing their district flair and unmatchable style to the masses, these live dates won’t be your typical acoustic night — instead the duo will bring energy that is sure to set the crowd alight and further cement The Showhawk Duo as musical talents that are just too good to miss.