Published by Amy Stutz On January 15, 2017 Leave a response 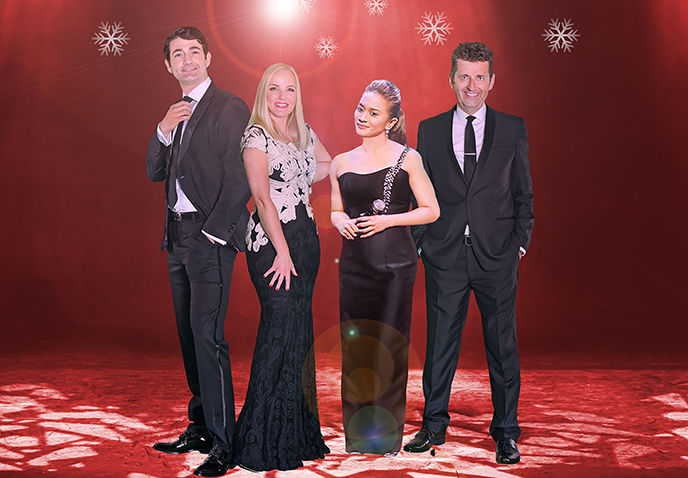 Nothing could brighten up your new year more than the stunning sounds of musical theatre sung by an exceptional cast at the Symphony Hall.

Touring again, the fantastic production of a variety of show tunes through the years is performed by four highly accredited West End singers. Regarded as musical theatre royalty for a multitude of reasons, Kerry Ellis takes to the stage to perform some of her classic musical theatre numbers. After playing Elphaba in Wicked, Fantine in Les Mis and Nancy in Oliver, she has an extensive list of theatrical credits. Alongside her, the beautiful Joanna Ampil brough her sublime tones to the stage. After starring as Eponine in Les Mis, Grizabella in Cats and Mary Magdalene in Jesus Christ Superstar, she has played a vast amount of roles.

Similarly, Oliver Tompsett brings charisma and charm with his faultless vocals. After most recently playing Sky Masterson in Guys and Dolls and Galileo in We Will Rock You, he provides a show-stopping performance. He is joined on stage by Graham Bickley, West End extraordinaire that starred in huge musicals such as Miss Saigon, Sunset Boulevard and Les Mis.

With a stellar cast, they took us through the ages of musical theatre and graced us with the delight of many composers. Opening with Rogers and Hammerstein, their powerful energy was evident during their opening number Oklahoma.

The concert then continued to showcase some of the best of the best musical theatre composers. Kerry Ellis sung the belter Don’t Rain On My Parade with fiery passion, and Graham Bickley gave a witty performance of I’m Reviewing The Situation from Oliver. Oliver Tompsett shone with his astonishing vocals – a highlight of the evening being his rendition of Being Alive. Joanna Ampil gave a heart-warming performance in her solo numbers, but she blew the audience away with her Miss Saigon duet with Tompsett.

Each solo number had emotion and was utterly commanding, however when the singers joined together for the final Les Miserables Medley, it was definitely something to remember. Equally, Kerry Ellis and Joanna Ampil’s duet of For Good from Wicked was beautifully moving.

Kerry Ellis’ performance stood out as completely breathtaking, her vocals are remarkable and appear effortless, she is a true star. If you love musical theatre, The Sound Of Musicals is a show not to be missed. You’re well and truly taken through time and reminded of why musical theatre is so incredible.