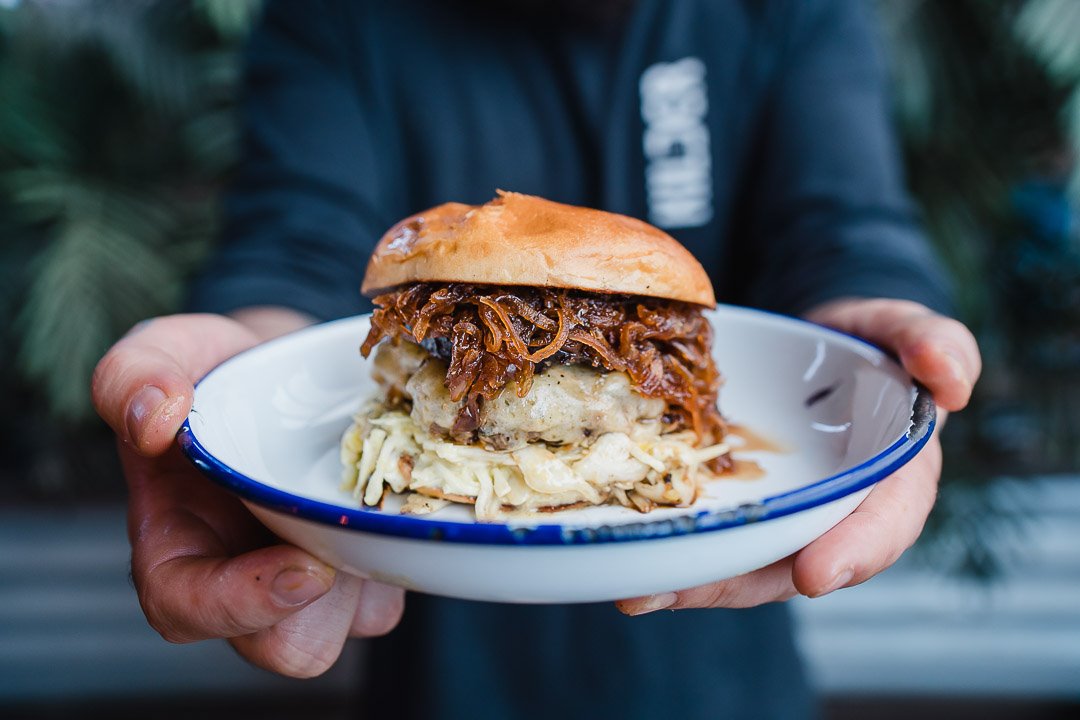 Burger patties have been around for several hundred years in one form or another. It is generally accepted the hamburger originated in 1758 in Hamburg (not made of ham), but in modern day terms the humble burger came to prominence at the 1904 World Fair in St.Louis, USA. A burger craze took place between 1921 and 1969, and by 1985, it was reported that 1 out of every 6 visits to any restaurant in America was to McDonald’s. The oldest surviving burger chain in America is White Castle which opened in 1921.

The basic ingredients of a burger still remain as grilled mince meat in between a bun – the tasty Cheeseburger popped up around 1934. This same year Wimpy first opened in the United States and was based in Chicago. The brand was introduced to the United Kingdom in 1954 as “Wimpy Bar” and eventually gave way to McDonald’s which opened in Woolwich, London, November 1974. McDonald’s opened on Broad Street Birmingham the following year, with Burger King entering the UK in 1976 as a higher quality market than McDonald’s.

McDonald’s preferred to source ingredients locally, but until it reached scale the company was unable to convince British suppliers to meet its exacting product specifications. An exception was Hawley’s of Birmingham, who won the bread bun contract in August 1974. When the first UK McDonald’s opened, the beef and buns were British, onions imported from California, cheese and paperware West Germany, milkshake mix from the Netherlands, fish from Denmark, potatoes Canada, apple pies Oklahoma, sauces and pickles from New York. Much of the machinery and interior fittings were imported from the United States.

Discounting the UK-wide popularity for the simple Burger Van, which was synonymous with late-night clubs and pubs, Brum’s first real burger success story was the Handmade Burger Co, founded in Brindleyplace in 2006. The burgers are made by hand using 100% prime Scotch beef and hand pressed – there are presently 19 venues in existence.

Brum Tings really started to hot up though in 2012 with the inconspicuous launch of Digbeth Dining Club. This offered local street food vendors the chance to strut their stuff to a cool crowd of foodies and musos giving rise to several burger vendors who would go on to open their own permanent premises.

With all this in mind, let’s take a look at some of Birmingham’s finest burgers today:

Original Patty Men, started off life in Digbeth Dining Club as a street food vendor. After wining a British Street Food Award for ‘Best Burger 2014’ the next step was a permanent home for their beautiful burgers to bloom. Inside is a bare, minimal interior, serving burgers made with aged beef patty, inside a yoghurt and buttermilk bun, unless of course you opt for the equally delicious vegetarian option. You can choose from the classic Cheese Burger to a Bacon Layered Cheese Burger, or a Maple Coated Bacon Burger, Chicken Burger and of course the vegetarian option ‘Po boy Style Breaded Mushroom Burger’. All the meat is free range. Open Wednesday – Sunday.

EST 2012 The Meat Shack were big boys at Digbeth Dining Club and took the same route as OPM by setting up a permanent home in the city. As with OPM and Bonehead these folk also serve some fine craft ales on tap and by the can/bottle. Diners will be greeted with a cool modern burger joint which uses well aged grass fed beef, hand ‘smashed’, creating the best, crispy caramalisation of beefiness on the outside, leaving all the dripping filthy goodness on the inside (there’s a Deep Fried Halloumi Cheese and Mushroom Duxelle vege option). For those in the know, there are a few secret specials to try… and for the grockles, there’s the Hell Shack (aged beef patty, fresh green chilli relish, Rib Man Holy F*ck Sauce, American cheese, ketchup, mustard, onion and lettuce) and the RnB (aged beef patty, red Leicester cheese, Dutch gouda cheese, candy bacon crumb, black pudding, gochujang mayo and ketchup) are to die for.

17 Thorp Street, Southside, Birmingham, B5 4AT.

Flamin’ Patties provide food lovers of Birmingham the quintessential burger experience. Established in 2018, Flamin’ Patties has served only fresh food to their customers, including some of the finest burgers, fries, hot dogs & wings the city has to offer. When eating at Flamin’ Patties you can always be sure to enjoy fresh food served by welcoming staff in a lively atmosphere. Every patty is minced in house and grilled with 100% fresh, quality beef. The restaurant guarantees you will never eat yesterday’s beef in today’s burgerFrom the linseed buns that come fresh from local bakers, to their unlimited selection of in-house toppings that are sourced from local farms. Diners can fully customise to suit their needs. Choose from 16 different toppings to add to your burger for maximum satisfaction at no extra cost.

The Indian Streatery is home to a family of foodies who started as street food traders working at Digbeth Dining Club under their street food name The Indian Rasoi. Serving up a traditional, authentic, menu with a concept that bridges the generations the all female team of all chefs have created their take on the Pav Bhaji (Indian burger served in a brioche bun). Topped with their unique handmade fresh mint and coriander puree relish choose from tasty titles like the Minted Lab Pakora Burger (a succulent Indian spiced lamb patty topped with chilli cheese, crispy Pakora bites, tamarind and mint yoghurt sauces and streatery slaw) or the Lentil & Chickpea (a mixed lentil and chickpea burger lightly grilled, topped with chilli cheese, tamarind and mint yoghurt chutneys and streatery slaw). Open 7 days a week.

Bonehead is a specialist gourmet fried chicken joint just off John Bright Street. Decor is cool and funky, with trendy craft ales and a menu which is short and sweet, and mainly caters for chicken lovers – wings, legs, thighs, and burgers. Bonehead offer free range options and they also do a chickpea veggie burger. The ‘Hothead sauce’ are a force to be reckoned with. Try the Hothead Burger (fried chicken thigh in Nashville hot seasoning, lettuce, comeback sauce and gherkins) or the Buffalo Soldier (fried chicken thigh in buffalo hot pepper sauce, lettuce, gherkins and blue cheese sauce). Open Tuesday – Sunday.

Voted one of the “Top 20 Pubs in the UK” by The Morning Advertiser, The Plough in Harborne has a villagey vibe. Filled with quirky details, and Winner of the Northern design awards best restaurant and bar design, customers will have high expectations the moment they walk through the doors. Renowned for homemade stone-baked pizzas and silky flat whites, there are plenty of food accolades to inspire confidence. The Plough serve fantastic chargrilled burgers on homemade brioche buns such as the Smoked Streaky Bacon Burger (with Caramelized Red Onion, Cheddar and Bourbon BBQ Sauce) and the Buffalo Chicken Burger (with Blue Cheese Sauce, Pickled Chilli and Iceberg Lettuce). For regulars there is the brilliant Plough App, which offers discounts, and special offers throughout the year. Check it out here. Open 7 days a week offering 2-for-1 burgers all day Tuesdays.

Founded in 2017, BA-HA provides delicious food that’s both healthy and aligned with vegan. BA-HA source all organic produce locally from farmers and local community businesses, creating products with 100% love to provide the experience of homemade goodness. BA-HA started as a pop up/ kitchen Takeover in 2018 and now reside within Sobremesa Bar in The Custard Factory Digbeth. Infamous Buffalo King Kentucky Burger pictured.

The Old Crown is one of Birmingham’s oldest buildings. Originally built in the 14th century almost all of the present building dates from the early 16th century. The Old Crown has reinvented itself whilst maintaining that true ‘old boozer’ feel. Food served here is far more than simply pub grub, with a substantial selection of burgers on the menu such as the OC Burger (beef patty, streaky bacon, American cheese, lettuce, tomato, red onion, gherkins, mayo, French mustard) and the Scorched Halloumi (v) (fried halloumi, pickled chillies, lettuce, tomato, red onion and thousand island sauce). Open 7 days a week.

The Head of Steam

The Head of Steam opened on Temple Street in 2018. There is an extensive selection of Craft Beers, Cask Ales, Cocktails, Wines and spirits with a great bar menu featuring a bewildering array of burgers. With blinders like The Bourbon Smoker (triple stacked beef patties, maple candied bacon, U.S. cheese sauce, with hickory and bourbon smoke infusion), the Teriyaki Chicken (Teriyaki chicken, grilled pineapple, rocket and pink mayo) and The Super Green (quinoa, spinach, ginger and chilli burger with guacamole, rocket and vegan mozzarella), it’s well worth making the most of their Happy Mondays any burger deal and Burger Club Thursdays. Open 7 days a week.

No article on the best burgers in Brum would be anywhere near complete without a big fat mention of Digbeth Dining Club. DDC started out life in 2012 as a street food event which was designed to pull together some of the best street food vendors in the region. It has since risen from strength to strength and is now a multi award winning weekly carnival of food, that has placed Birmingham firmly on the alternative food map and even draws in food stalls from other parts of the UK. Their burger prowess is unstoppable helping the likes of Original Patty Men (winners of ‘Best Burger’ 2014 at the British Street Food Award), The Flying Cows (Britain’s Best Burger winners at the 2017 British Street Food Awards), Meat Shack and Indian Streatery rise to flame. There are too many DDC burger vendors to mention, but present patty highlights must surely include www.onlyjerkin.com, www.facebook.com/LowNSlowStreetFood, www.dicks-smokehouse.com & www.facebook.com/thepattyfreaks. Whilst they remain in Digbeth you can now also find them at their other permanent residence at Hockely Social Club in The Jewellery Quarter. Check website for other events around the West Midlands.

*all images used from official pages – please contact us for any photo credits and will happily link out.