The Best Pizza in Birmingham by Megan Matthews

Published by Megan Matthews On September 23, 2016 Leave a response

When the moon hitting your eye looks like a big pizza pie, that’s probably your body telling you that you need a slice – or, more realistically, the whole thing.
But Birmingham’s a big place and, when you need to curb your cravings, do you have the time or the patience to deal with soggy crusts and half a slice of pepperoni per 10 inch? Course not, so naturally I’ve taken the painful task of doing it for you.

Now, of course, there’s always going to be the classics; the Pizza Huts and Pizza Expresses of the world but sometimes they just don’t cut it. In that case, you need to know what else Birmingham has to offer. 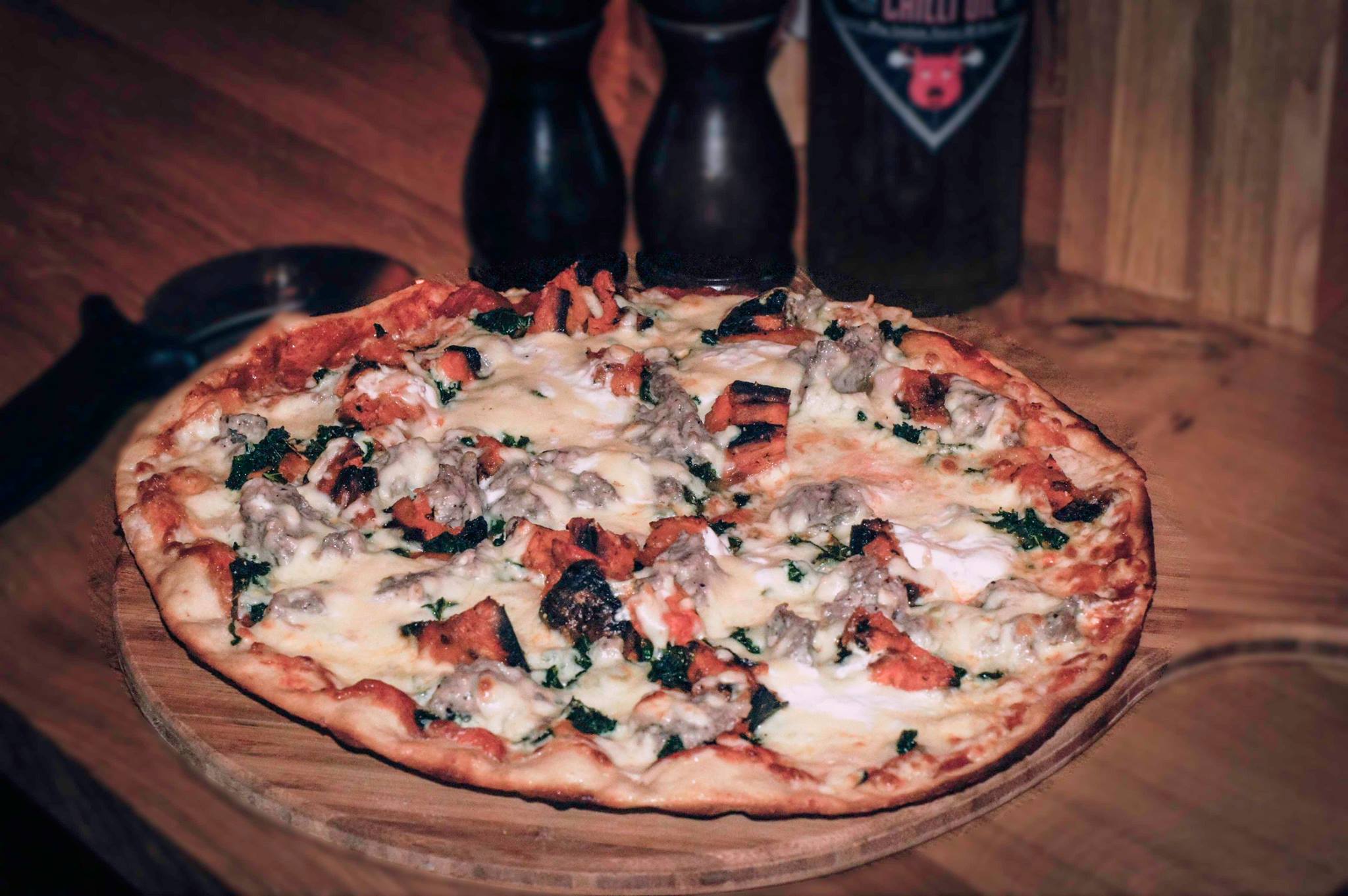 If you’re looking for flawlessly crisp crusts and the weight of your arm in meats (or veg) to go alongside your cider, this is the place to be. Now, obviously that was a hypothetical because who isn’t looking for that? After my visit, picking the top place for pizza in Birmingham was a no-brainer.

Rustic exposed brick meets industrial lights, dimmed to perfection at The Stable; the ideal setting for all the romantic time you dream of spending with pizza. Plus, if you’re old enough to drink, the Devon Red cider complements pizza in ways I can’t even describe, while kind of making you feel sophisticated; it looks like wine but just tastes like fruity goodness so, basically, meets every criteria I have for alcohol.

I tried the Longhorn Jim with caramelized onions on recommendation and I was definitely not disappointed. They took the decidedly difficult feat of taking something as mundane as onions and somehow made them the shining star of the pizza, I’d have asked for an entire bowl of them if I hadn’t been too busy scoffing the whole thing. The chorizo slices were what really amazed me though, they positively glistened – honestly, it looked like a commercial and I was happy to be a part of it.

Now that you’re already on the phone booking your table, I bet I can make you drool a little bit more with just two small words; dessert pizza. They take that thin, airy yet crispy base and just drown it in Nutella and mascarpone. There’s no more ‘eat all of your dinner first’ when dinner is dessert, though honestly I don’t see you having a problem finishing the entire thing – I know I didn’t. {Stable Pizza Company} 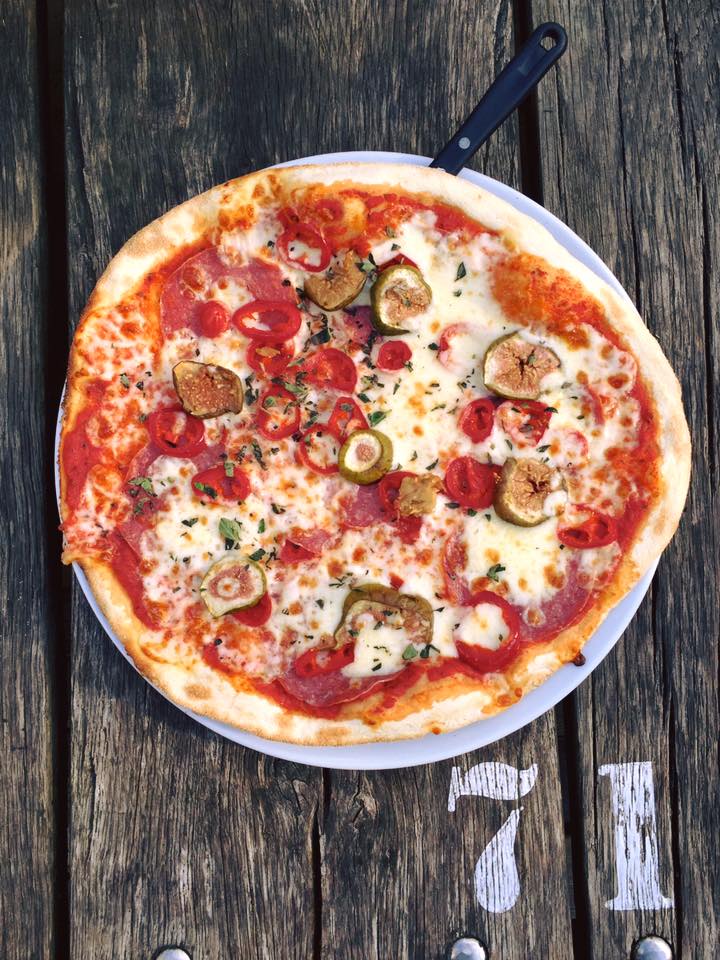 Voted one of the “Top 20 Pubs in the UK” by The Morning Advertiser, The Plough in Harborne has a villagey vibe right in the centre of Birmingham.

Filled with quirky details, and Winner of the 2011 Northern design awards best restaurant and bar design, customers will have high expectations the moment they walk through the doors.

This busy, stylish little pub, took the gastro idea and twisted something traditional into a cool modern concept in pub and restaurant.

The Plough are renowned for their homemade stone-baked pizzas. This long standing foodie pub prides itself on some of the best cheesy feasts in south Brum and there are plenty of accolades to back that up.

Everything is carefully thought out in The Plough as competition is high in the part of the city, but a loyal customer base ensures new offerings are regular and seasonal produce is often used in cooking.

Expect a stunning selection of pizza toppings and served to near perfection in a relaxed village pub setting. 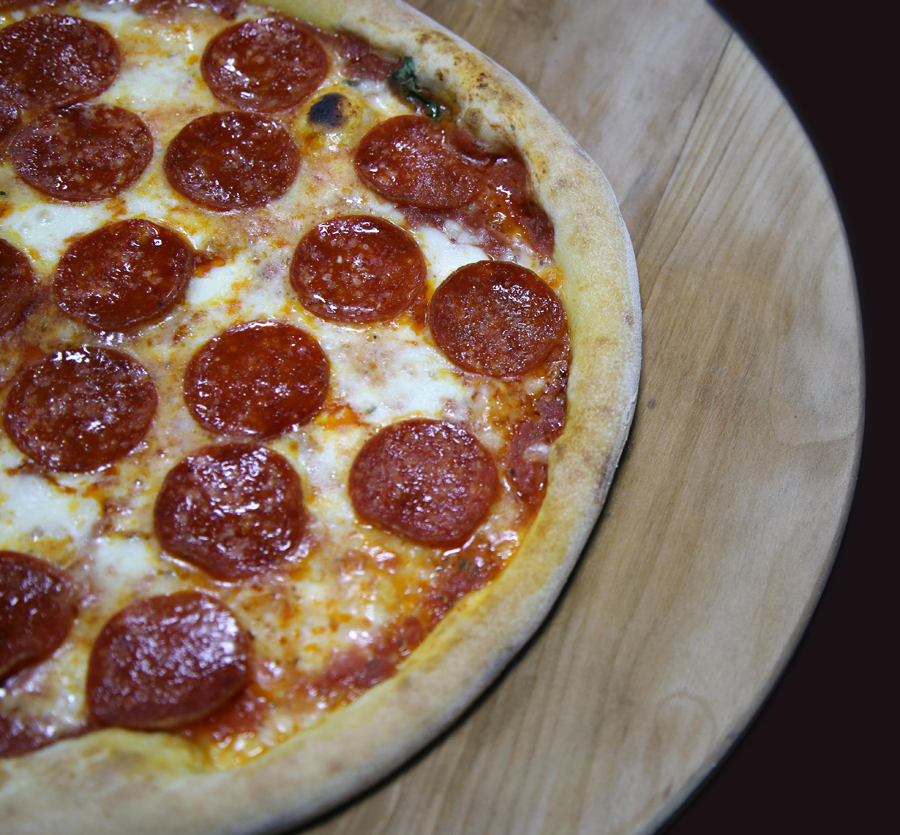 I’d be hard pressed to find a phrase I prefer more than ‘wood oven pizzeria’ when it comes to the topic of pizza.

I mean, really, think about it; what more do you want? Plus, La Vera lets me take that childhood nostalgia of chopped up hotdog and still feel classy while I eat a slice (don’t even get me started on the cutlery Vs eating with your hands debate) – because chopped up hotdog should be an elegant specialty, just the same as pizza is.

So, what to get when you go, I hear you ask. The Francescana is my favorite. Pizza’s built up a bit of a bad reputation as of recent, especially if it’s your food of choice when you’re stumbling home from a night out, but not just any piece of cardboard with sauce on it deserves the title.

But the Francescana will make up for all those half-edible crusts you’ve chewed on in your time and that’s a promise. The oven is Italian made and even the flour is imported from Italy. The meat is Halal and for vegetarians there is a great selection too. {www.pizzerialavera.co.uk}

The Eagle and Ball: 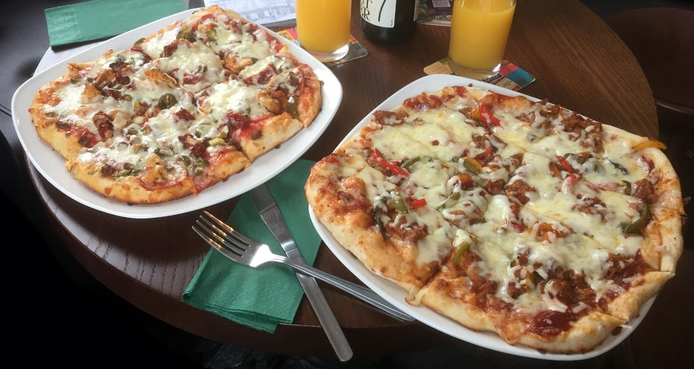 Of course though, I have to include a shock contender in this. The Eagle & Ball by BCUSU is a pub attached to Birmingham City University, and let me tell you, they know how to do pizza.

I know what you’re thinking; “pizza from a pub, that’s only good if you’re drunk” I know, after all that I’ve told you, it’s hard to believe but trust me on this.

The Napoli is their take on the classic margherita pizza and they did it; they made it better. They sprinkle this tiny bit of basil on there and I swear, it’s what makes the world go round. {http://eagleandball.co.uk/} 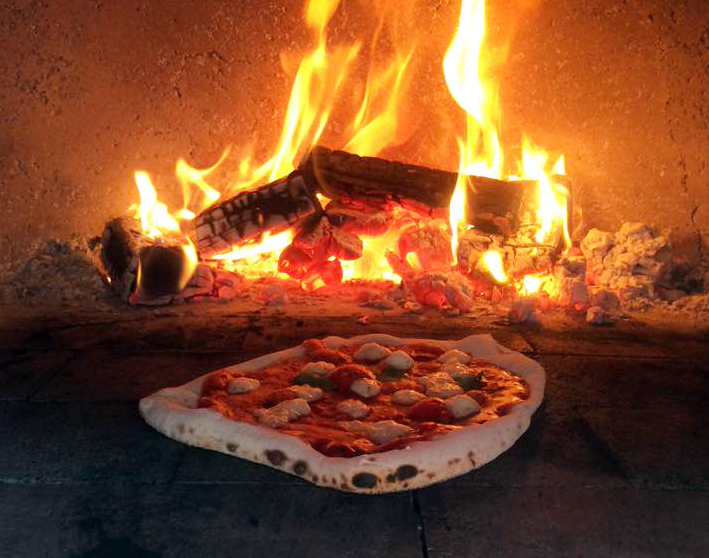 While Baked in Brick are more street food than restaurant, the quality certainly doesn’t suffer. This quality food they offer doesn’t always revolve around pizza but when it does, it’s glorious (insert the ‘food, glorious food’ choir here) and it really is ‘baked in brick’ – amazing.

When people think about pizza, they tend to let calzones fall through the cracks and that’s wrong. So, I’m going to put a stop to that and it’s a good ‘en.

They take a banana – yes that definitely means it’s healthy – and they tuck it in a crust with some Nutella for company – still healthy – and then they bake the living hell out of it until it’s perfectly crisp.

It’s a must see, which you can do the next time they bless us with pizza, on April 1st at The Deli in Boldmere. {www.facebook.com/bakedinbrickuk} 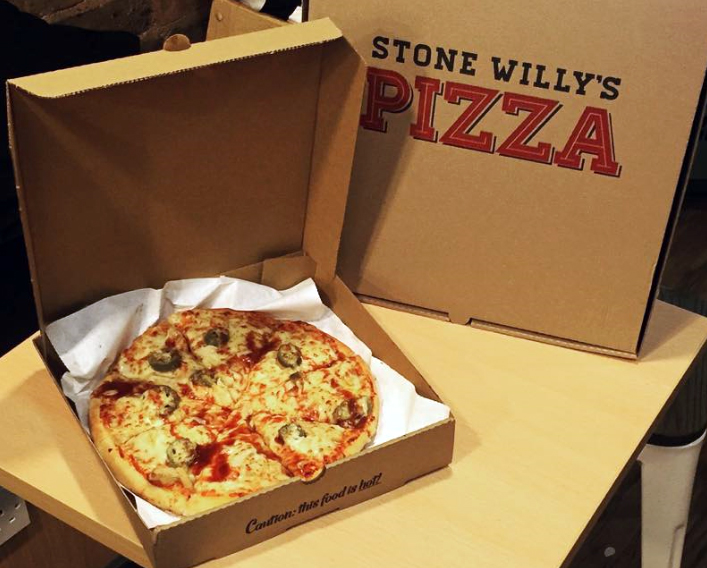 Stone Willy’s is a tiny little café attached to the Nisa on Corporation Street and I’ve got to say, it’s a real shock to the system. Open 24 hours a day, the sweet little café’s ideal for when your craving pangs start to hurt but you’re not willing to settle.

The crust is thin and just the perfect hint of flaky with lashings of sauce and a sprinkling of oregano-looking herbs to really secure that Italian-esque sophistication – can you see the trend I’m going for here?

If I can eat pizza and feel grown up then I’m happy. Granted, it’s cut short by the mandatory reversion back to childlike excitement as soon as you see the milkshake menu but kinder Bueno, in a milkshake? Well, it’d be rude not to. {www.facebook.com/Stone-Willys-Kitchen-Corporation-Street} 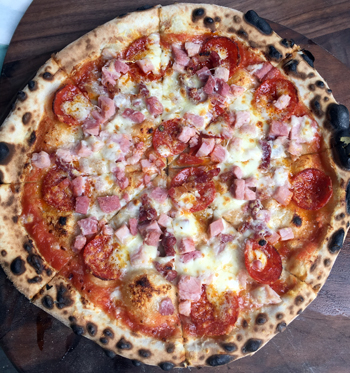 Spectacular Goat have been firm faves at Digbeth Dining Club for three years and they can bake a mean pizza.

Spectacular Goat have been listed as one of the must try dishes in Birmingham and considered for Best pizza in the UK by Shortlist Magazine too and it’s easy to see why.

These tasty pizzas are created to give ‘layers’ of flavour that start with the subtle sour notes of the dough and finishes with the smokey vapours of the oven.

In between are sweet, rich, spicy and intense combinations that marry the flavour combination together, and all this prepared before your eyes in their trusty pizza wagon!

If you can’t wait for an appearance at Digbeth Dining Club, you may be interested to know they are about to open their first restaurant in nearby Warwick. {www.spectaculargoat.com}

La Galleria – Family run, offering a fantastic choice of pizzas baked in an authentic pizza oven imported from Italy. Prepared to order at the open pizza bar, right before your eyes. www.lagalleria-birmingham.co.uk

Cucina Rustica – Fine Italian food in the heart of Birmingham. Authentic and traditional pizzas which are made to order, so if you cannot find your favourite feel free to ask and they will make it bespoke. www.cucinarustica.co.uk

Fumo –  Part of the award-winning San Carlo Group of Italian restaurants around the world. The independent, family-owned business was founded in Birmingham in 1984 by Carlo Distefano. Each week the best quality ingredients are bought from the markets in Milan to ensure Carlo’s high standards. Pizza menu is limited but worth a visit and you can also nip next door to San Carlo for a wider choice if need be. www.sancarlofumo.co.uk

Mr Singhs, Handsworth Wood – Mr Singhs is a take away that creates amazing vegetarian pizzas with the option to have vegan cheese if you like. The pizzas are deep dish (you can ask for thin crust) and great value. The Margherita is one of their speciality pizzas. The vegetarian hot is a fave, or you can get a vegetarian pepperoni or sausage pizza too! Review by Sally Watson-Jones here!