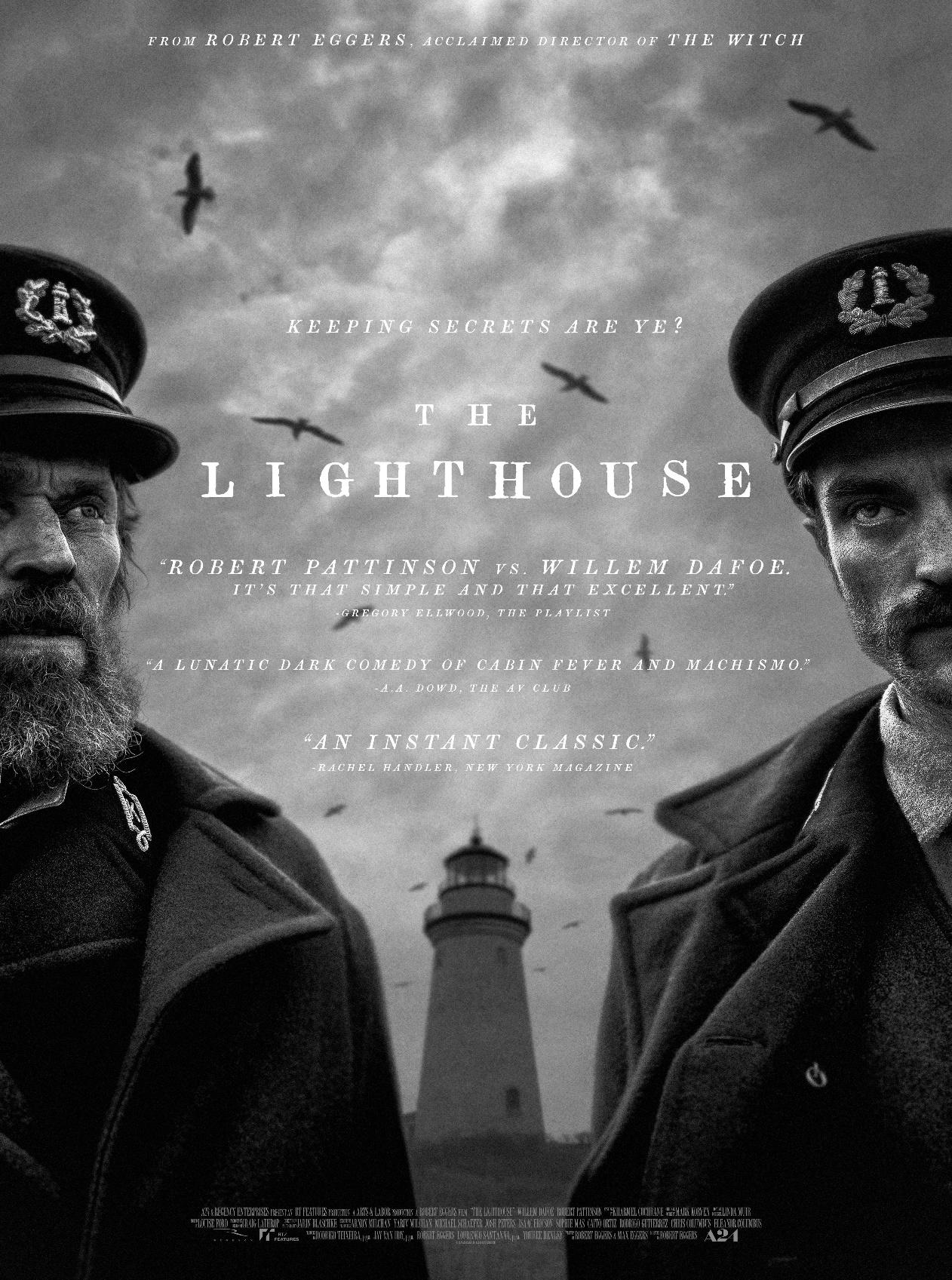 Washed up shore from the 1890s, carried by A24 Productions, The Lighthouse (2019) is an art-house psychological thriller, directed by visionary filmmaker, Robert Eggers.

After his first feature film, The Witch (2015) and its unexpected success, he decides to join forces with his brother, Max Eggers, introducing the apocalyptically dark and stormy tale of The Lighthouse.

Max was originally working on a contemporary ghost story in a lighthouse, inspired by the latest and unfinished work of Edgar Allan Poe, with the unofficial title, The Light-House. Unable to finish the project, Robert joined him and began researching lighthouses, when he came across ‘’The Smalls Lighthouse Tragedy’’. The incident took place around the 1800s, in Wales, and was significantly enlightening for two auteurs in order to create their own original screenplay; focusing on different themes and elements, while keeping Poe’s title on the surface.

As a period-film, to construct the appropriate language, the Egger brothers were mostly inspired by the works of Sarah Orne Jewett, a Maine based poet and novelist whose best works set on the Eastern seaboard during the 19th century, including interviews of old sailors and farmers. Other major influences included the works of Herman Melville and Robert Louis Stevenson, as well as nautical dictionaries for language precision.

Robert hired the same dream team from The Witch, including cinematographer Jarin Blaschke for that eerie and dreadful atmosphere required, costume designer Linda Muir to delicately tailor the period costumes, composer Mark Korven for a transportive and harrowing score, editor Louise Ford for an intentionally misleading editing and production designer Craig Lathrop, for constructing every structure seen on screen.

The Lighthouse is an ambiguous film, with poetic characteristics and mythological inspirations. Symbolisms are constantly present, where legends of folk and literature collide, from Greek Mythology to Lovecraftian fiction.

The viewer signs up for a cerebral experience that wakes your deepest fears, plays games with your subconscious, and eventually imprisons you into an other-worldly dimension, floating between reality and fantasy.

Troubled by his past, a former timberman named Ephraim Winslow (Robert Pattinson), starts his life over as lighthouse keeper, sent to a remote island off the coast of New England to serve a contract job for 4 weeks, under the authority of an older wickie, Thomas Wake (Willem Dafoe).

The two strangers are forced to live together in a confined space, under torturous living conditions. As days passed by, the power struggle between the two men intensifies, allowing tensions to boil over. When a monstrous never-ending storm hits the island, they cannot be rescued and they are forced to experience psychological and physical battles, while trying to maintain their sanity.

Atmosphere always comes first in Eggers’ projects, so he knew that The Lighthouse had to be a black and white, horror awakening picture.

Cinematographer, Jarin Blaschke, shot the film on an almost squared frame, with an aspect ratio of 1.19.1 and Black and White Double X film stock, making every frame feel like a personal memory to the viewer.

For the purpose of filming, several sets had to be constructed in different locations.

All the exteriors were built on Canadian fishing community of Cape Forchu in Nova Scotia, including the full-scale lighthouse tower of 70-foot height and the tiny cottage where the two lighthouse keepers used to live in. As for the interiors, most of them were built inside soundstages and warehouses near Halifax.

Having to film between March and April of 2018, Cape Forchu was such an inhospitable location with punishing weather conditions, that made it extremely difficult to shoot for both the cast and the production crew but was ideal for the film’s aesthetics and storytelling.

Dafoe and Pattinson’s performances were phenomenal, captivating and powerful to watch.

Recalling his career, Pattinson has evolved in remarkable ways, and does not hesitate to lose himself in weird characters, just like he did with the shy, enigmatic and mentally unstable Ephraim Winslow, whom he portrayed fearlessly.

As for Dafoe, over the years, he has proven that he is a world-class chameleon, who can bring to life any character so effortlessly, as he did with the tough, controlling and superstitious, Thomas Wake.

The Lighthouse is a true master-craft of filmmaking that will haunt the world of cinema for many decades to follow.

There is enchantment in the light…Dare to see through it?

The Lighthouse is on at the electric cinema, and also at The Mockingbird Cinema.