Published by Sally Jones On February 17, 2017 Leave a response

You may have seen recently adverts for the Go Vegan World campaign popping up across the city. As a vegan myself, I was intrigued and wanted to find out more. I spoke to Sandra Higgins, Founder & Director of Eden Farmed Animal Sanctuary Ireland and Go Vegan World Campaign Director.

Birmingham is only one of several locations where Go Vegan World has been live since June 2016. Other locations include the North East of England with a focus on Newcastle, Scotland with a focus on Glasgow, several nationwide campaigns including major motorways and tourist regions of the UK and cities including London, Bristol, Milton Keynes, Liverpool, Leeds, Sheffield, Leicester, Cardiff, Southampton, Nottingham, and Portsmouth.

Birmingham is the second largest city in the UK in terms of population with very high numbers of tourists. Yet, the city is quite compact so the campaign is easily replicated across many formats. The billboard on the M6 outside Birmingham is the biggest billboard in Europe and it targets everyone driving or stuck in traffic on that road.

The campaign targets a very broad audience on the basis that veganism concerns every man, woman and child on the planet. 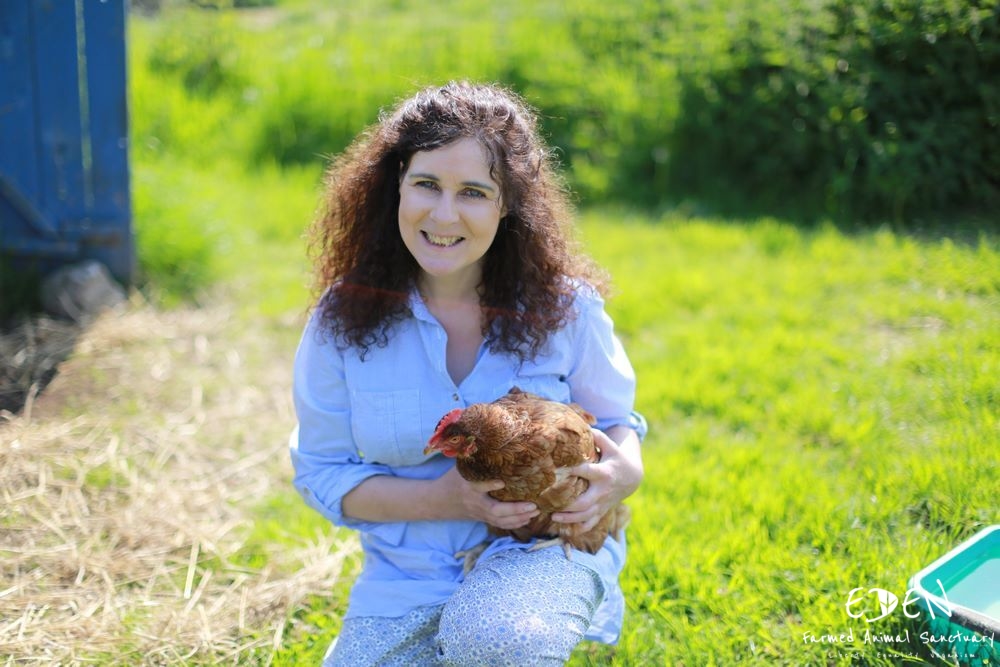 Why an ad campaign?

Vegan Education has always been the chosen form of outreach of Eden Farmed Animal Sanctuary. We have been conducting vegan education and outreach through Matilda’s Promise, the Animal Rights and Vegan Education Centre, attached to Eden, for years. The rationale behind Go Vegan World was that it would reach a significantly higher number than we had previously been able to reach.

However, the ads are only one feature of the campaign. They direct people to the resources of the website and social media and, in particular, our free Vegan Guide. Through these resources people can research veganism for themselves.

How successful has the campaign been so far?

The campaign is very successful. On average 500 Vegan Guides are downloaded every day and when the campaign is live we receive an average of 2000 new visitors to our website every day. The public reception has been very positive. Most people comment that they have learned new information through the campaign that they were not previously aware of. They report that what they have learned is horrifying and they see that veganism is the only rational step to take to stop participating in it.

What’s the next step after the adverts?

Ideally the, ads would not stop until we have reached a critical mass of vegans who are motivated by our ethical duty towards other animals. Thereafter, there is much work to be done by the animal rights movement to create a vegan world, not least facilitating farmers to transition to plant based agriculture.

What’s your vision for a world free of animal cruelty?

I want more than a world free of animal cruelty. I want what other animals want: a world where every life is treasured equally; a world free of the speciesist notion our difference from them entitles us to use them.

Other animals are not our property. They are not ours to use. There is no humane way of using them and there are no good excuses for not being vegan. We use them for trivial reasons such as taste, habit, convenience and tradition.

They existed on this planet for millions of years prior to our evolution. They were not dependent on us. We selectively breed them, imprison them and control the very minutiae of their lives from when they are born, to how they will die. Animals who had lived on this earth for millions of years before us and survived so well without us have come to be regarded as mere objects, their very existence recognised only in relation to their use to us. Domestication has legally entitled us to use them as if they are inanimate, unfeeling objects. They are sentient, conscious, feeling beings whose lives matter to them just as much as our lives matter to us.

Do you have any tips for people starting out as vegans?

Any meaningful lifestyle change involves change at the level of our hearts and minds first and then a change in our behaviour.

Too many people try to be vegan by beginning at the final stage of behavioural change. They focus on recipes and diet and the latest vegan item to hit the shop shelves. It is much more helpful to focus on the motivating factors by familiarising ourselves with what other feeling beings go through to become the commodities we regard as animal ingredients or products.

Once we are strongly motivated to regard them as our equals, when we respect that like us they are sentient, conscious, feeling beings, then it is very easy to stop exploiting them. People who stay vegan do so because they are ethically motivated. Mentally swap places with them and you will find it very easy and enjoyable to live vegan knowing it is the very least you can do.

How can people get involved?

People can support the campaign by telling their non-vegan friends, family and colleagues about the resources of our website and free Vegan Guide. They can share our work on social media. People can also write to us to obtain campaign flyers and vegan guides which are proving very helpful to activists in their own outreach.

To find out more about the campaign visit the website at goveganworld.com where you can download your copy of the free Vegan Guide, with more information and help for anyone interested in veganism and animal welfare.

Article by by Sally Watson-Jones