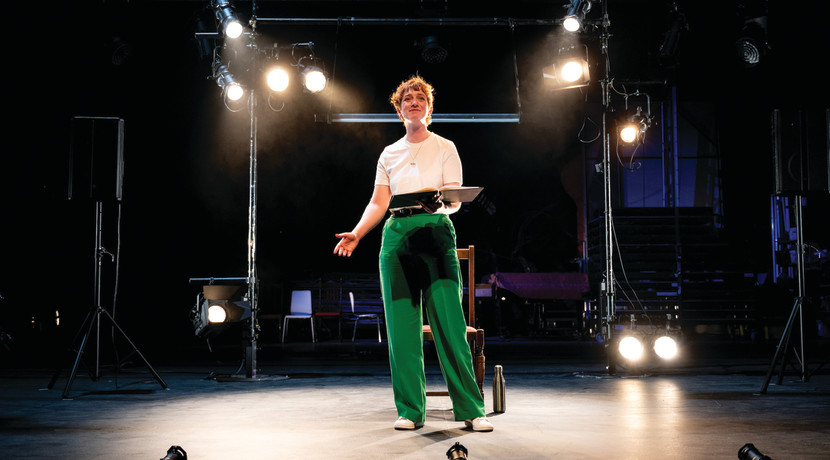 Phoebe Frances Brown has always wanted to be an actor, and at 26 had just been cast in her dream role at the National Theatre; at the same time, she was diagnosed with incurable cancer in the area of her brain that controls speech, language and memory. The Glad Game is Phoebe’s story of finding herself in the hardest of times, of finding gladness in the saddest moments and of continuing to do what she loves. The tour starts in Phoebe’s home city of Nottingham, and will tour in Autumn 2021 and Spring 2022 supported by charity partner Brain Tumour Research. It will also be available as a made-for-film digital edition streamed from each venue. The Glad Game is produced by Pippa Frith and Nottingham Playhouse, and directed by Tessa Walker.

Finding a new way to talk about cancer and illness, The Glad Game debunks some of the myths around what life is like for people, particularly young people, who live with cancer. The tour goes on whilst Phoebe is having chemotherapy, reflecting on stage what is current everyday life for Phoebe: work and treatments and acting and naps and family and friends and life all existing at the same time in one experience. The Glad Game is about life: about a life lived with cancer, about creating the life you want in the most challenging of circumstances and about how what and who you love can pull you through.

Phoebe Frances Brown said, “I wanted to write and perform a play about life being stranger than fiction; that even after receiving the most devastating news, there’s still hilarity and joy to be had. There’s still things to be glad about.”

Phoebe Frances Brown is an actor and writer from Nottingham. She works in theatre, comedy, radio and television. Her most recent theatre credits include Small Island and If We Were Older at the National Theatre and she has performed at New York Theatre Workshop, Donmar Warehouse, Soho Theatre, Birmingham REP, Nottingham Playhouse, Leicester Curve and at the Edinburgh Festival Fringe. She played the role of Constance Pettigrew in the BBC Radio 4 series Home Front and has recently recorded The Whisperer in Darkness for BBC Sounds. Her comedy troupe Major Labia is a Creative Associate of Nottingham Playhouse.

Pippa Frith is an independent producer based in the West Midlands. She has been awarded with the Peter Brook / Mark Marvin Rent Subsidy Award at the 2014 Empty Space Awards. She has worked with artists including Stephanie Ridings, Francesca Millican-Slater and Benji Reid, and is Executive Producer for Fierce Festival.