Home » What's on » Brian Eno & Roger Eno Announce Live At The Acropolis, Concert Film of Their Only Ever Live Performance – Exclusive to UK Cinemas 2nd March 2023

Brian Eno & Roger Eno Announce Live At The Acropolis, Concert Film of Their Only Ever Live Performance – Exclusive to UK Cinemas 2nd March 2023 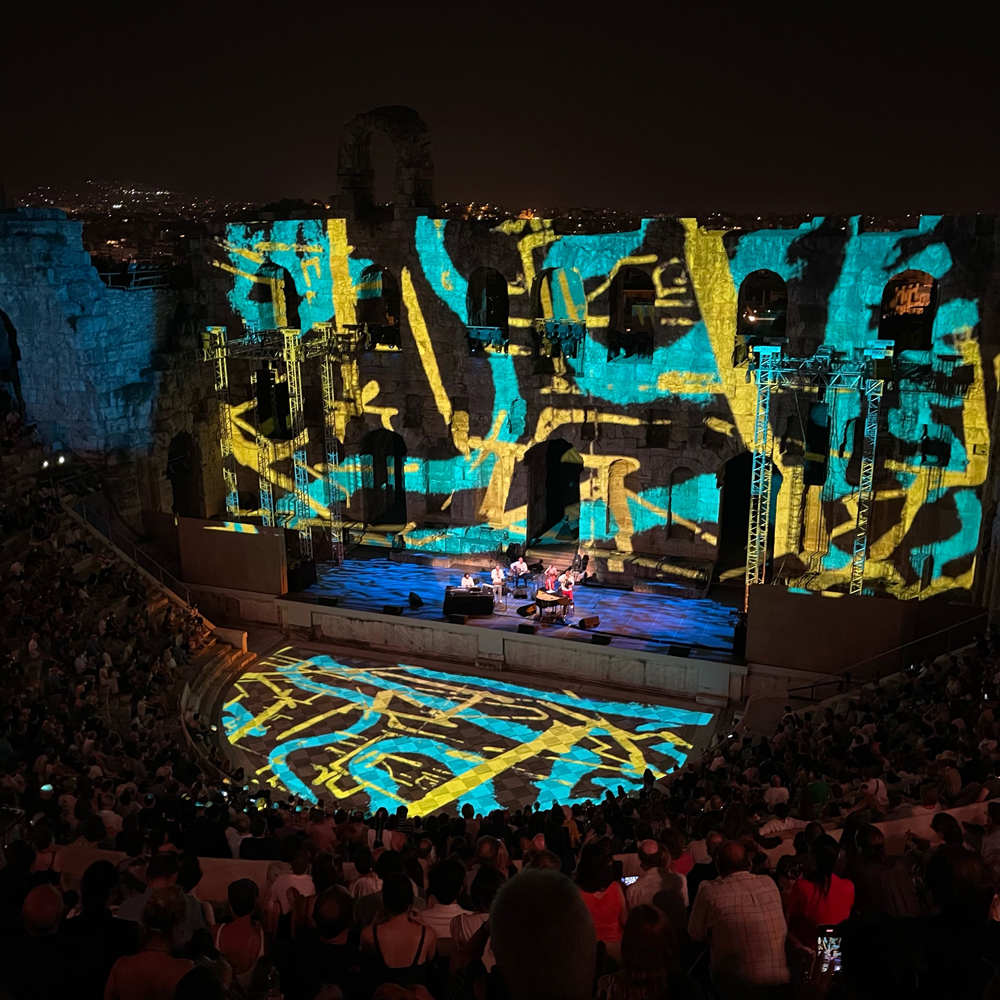 “The Eno brothers make their much anticipated live debut on the slopes of the Acropolis. Were the gods listening they couldn’t help but be moved.” ~ Uncut September, 2021.

A film of a rare live concert of the Eno brothers performing together for the very first time, Brian Eno and Roger Eno Live At The Acropolis, will premiere in cinemas across the UK on the 2nd March 2023.

Captured in August 2021 at the Odeon of Herodes Atticus amphitheatre, part of the UNESCO World heritage site, the Acropolis in Athens, the concert was part of the annual Epidaurus Festival.

In front of a sold-out audience and against a backdrop of Brian Eno’s haunting images projected onto the walls of the amphitheatre, Brian and Roger performed music from their highly regarded 2020 album, ‘Mixing Colours’. During this extraordinary time when the grip of Covid was beginning to loosen, the brothers performed solo pieces and fan favourites, as well as premiering brand new music from their respective 2022 album releases – Brian Eno’s ‘FOREVERANDEVERNOMORE’ and Roger Eno’s Deutsche Grammophon solo debut, ‘The Turning Year’.

“I don’t perform live very often, but I couldn’t miss the chance to perform in what may be the world’s oldest theatre, located at the birthplace of Western Civilisation. I’m grateful to Roger, Cecily, Leo and Peter who made this rare appearance memorable for me, and to the great film-maker Tilo Krause who managed to make a beautiful documentation of the whole event.” – Brian Eno

“The performers had quite a different view to the members of the audience – they saw Brian’s stunning visuals on the ancient walls of Odeon of Herodes Atticus, whilst we saw, above our heads, the illuminated Parthenon as though floating in the blackness of night. It was an exceptional honour to perform in such a place. This film, I think, captures the moment accurately and sensitively. But it is more than a mere momento or a document – it is a work of beauty in itself that can now be shared worldwide.” – Roger Eno

Brian and Roger first collaborated with Daniel Lanois on the soundtrack to ‘For All Mankind’, Al Reinert’s epic 1983 documentary on the Apollo moon landing and released as the highly acclaimed album, ‘Apollo: Atmospheres and Soundtracks’. They have also contributed to soundtracks for ‘Dune’ (1984), ‘Opera’ (1987), ‘The Jacket’ (2005), Brazilian film, ‘O Nome da Morte’ (2017) and were nominated for a Bafta award for their score to Danny Boyle’s TV series, ‘Mr. Wroe’s Virgins’ (1993).

The screenings will take place on Thursday 2nd March. For tickets in cinemas across the UK, please visit: CinemaLive.com/event/brianandrogereno