To Sir, With Love – live at The REP 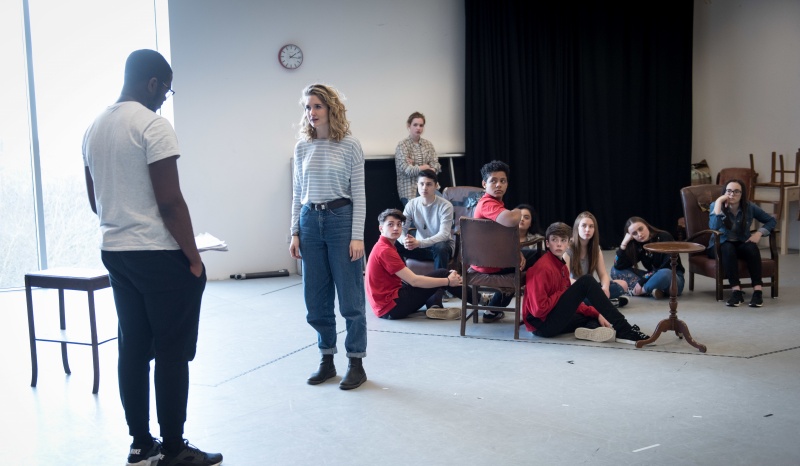 E.R. Braithwaite’s powerful story, To Sir, With Love, is brought to life at Birmingham Repertory Theatre this spring. Immortalised in the classic film of the same name, starring Sidney Poitier, and brilliantly adapted for the stage by the writer of East Is East, Ayub Khan-Din, this brand new production directed by Gwenda Hughes and Tom Saunders will be brought to life by a company of talented young performers alongside professional actors.

Following last year’s sell-out run of The Rotters’ Club performed by Birmingham Repertory Theatre’s Young REP, the young performers, aged 15 – 21 from across the West Midlands will take to The REP’s main stage once again for this unmissable new production. They will appear alongside Philip Morris as Rick Braithwaite, Matt Crosby as Humphrey Weston, Polly Lister as Vivienne Clintridge and Andrew Pollard as Leon Florian.

Based on E. R. Braithwaite’s autobiography, To Sir, With Love is an inspirational story of courage and hope. Rick Braithwaite, a Cambridge graduate and ex-RAF fighter pilot, has fought for his country but is still fighting for acceptance. Despite being a skilled engineer, no employer wants him. As the reality of life as a black man in post-war Britain hits him, he is forced to take a teaching post in a tough but progressive inner city school.

Rick’s class don’t want him. The world has given up on them and with very little to look forward to after leaving school, they are in no hurry to listen to him. But Rick knows what it’s like to be ignored and isn’t going to turn his back on them too. Can they unite to fight for a better future?

Set against a changing backdrop, where World War II still looms large in the public memory, and strides are yet to be made in civil rights, this remarkable story about fighting prejudice with hope, set during a time of austerity, is still as relevant today as it was when it was written.

Talking about what drew him to adapt the piece Ayub Khan-Din has said “I think for me it was about reading the book and seeing what resonated. For me that was the discussion about education. Especially today, as everyone is so concerned about the way we’re educating our children, the style we’re using and how we’re all worrying about the schools we can get our children into.

The thing about To Sir, With Love is that it talks about a radical form of education. In this school they try to get children involved in the decision making of the school and to have a say in the way they are educated. The school is given a responsibility to look beyond formal education and has a vision to send children out into wider society, fully able to participate in the decision making of that society. That’s what fascinated me and made me excited about the book and the ideas that I wanted to put into the play.

To Sir, With Love was E. R. Braithwaite’s first book and was written in 1959. Later books include Paid Servant, A Kind of Homecoming and Reluctant Neighbours.

Ayub-Khan Din is the celebrated author of East Is East, which premiered at Birmingham Repertory Theatre in 1997 before going on to become a hugely successful film. His other work includes Rafta Rafta which won an Olivier Award for Best New Comedy and West is West, the sequel to East is East.

Gwenda Hughes returns to Birmingham Repertory Theatre to direct. She was previously Associate Director at The REP where she directed over twenty five productions, including the Olivier Award-winning musical, Once On This Island, and was also previously Artistic Director and Chief Executive of the New Vic Theatre in Staffordshire. Most recently she directed The Rotters’ Club, These Four Streets and The Wind In the Willows for The REP and Proof and Spring and Port Wine for the New Vic. Co-director Tom Saunders is The REP’s Head of Youth Theatre.

To Sir, With Love is designed by Michael Holt with lighting design by Simon Bond, AV and projection design by Louis Price, sound design by Clive Meldrum and movement direction by Beverley Edmunds.

TO SIR, WITH LOVE