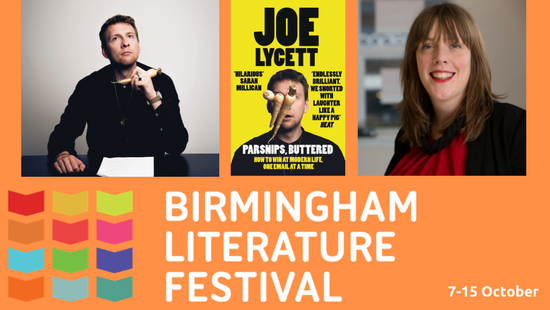 Saturday 7 – Sunday 15 October, Library of Birmingham and other venues across the city

The line-up for this year’s Birmingham Literature Festival was announced last night at a launch party at Waterstones in Birmingham.

They will join Booker-longlisted novelist Kamila Shamsie, acclaimed journalist and writer Gary Younge and children’s writer Christopher Edge in the week-long celebration of books and literature.

Audiences will also have a chance to experience a veritable feast for the senses: the Backward Running Dinner, inspired by Birmingham novelist Jim Crace’s short story of the same name, will be a theatrical dining experience like no other, where participants will start with the pudding and enjoy a multi-course tasting menu in a secret Birmingham city centre location.

As Jim wrote: “Life is uncertain. Eat the pudding first.”

Produced by local artist Kaye Winwood, the event will only have 2 sittings of 20 each.

As well as hosting bestselling writers and offering a platform to celebrate Birmingham and the Midlands, Birmingham Literature Festival has built a reputation for showcasing an exciting, eclectic mix of speakers from all backgrounds and literary genres, both established and emerging. This year, the Stories Crossing Borders strand is welcoming writers from Portugal, Poland, Latvia, Nigeria, India, Pakistan and the Caribbean.

The festival is hosting bestselling female Indian novelist Preeti Shenoy, in a partnership with DESIblitz.com, the UK’s biggest online Asian magazine with its roots in the South Asian subcontinent.

Virgin Trains joins Birmingham Literature Festival as a headline sponsor this year, as they too are celebrating 20 years of running the West Coast mainline route. With their headquarters based in Birmingham, the company is firmly rooted in the city, as is the cherished literature festival.

Writing West Midlands is very proud of the tradition and innovation represented by the Birmingham Literature Festival. During the course of twenty festivals we have brought a wonderful range of writers into the heart of Birmingham. Many have been Midlanders – Liz Berry, Benjamin Zephaniah, Kit de Waal and Jonathan Coe – but we have been equally energetic in bringing writers from around the world to perform, present and discuss their writing. The American poet Rita Dove, Hans Rosenfelt from Sweden and the Italian novelist Diego Marani have been a few amongst many highlights. Of course, a Festival is nothing without its audiences and ours are particularly warm and welcoming as well as being full of questions and opinions. This year’s Festival has an extraordinary range of writers and we look forward to the many wonderful events to come.

Birmingham Literature Festival offers readers, writers and book lovers a different way to appreciate the city; this year, you can take to the canals in a kayak at dawn or dusk, setting off from the iconic Roundhouse to the west of the city centre, and returning after an hour on the water to then take part in a writing workshop. There’s also a walking tour through Birmingham city centre, retracing the steps of the industrial pioneer and printer, John Baskerville (creator of the Baskerville font.) The walking tour will be led by Ben Waddington, Director of the Still Walking festival.

For those who can’t choose from the range of events, Birmingham Literature Festival is offering a Festival Pass, so you can attend every speaker event during the festival for just £70.

For tickets and full details of events, see www.birminghamliteraturefestival.org.