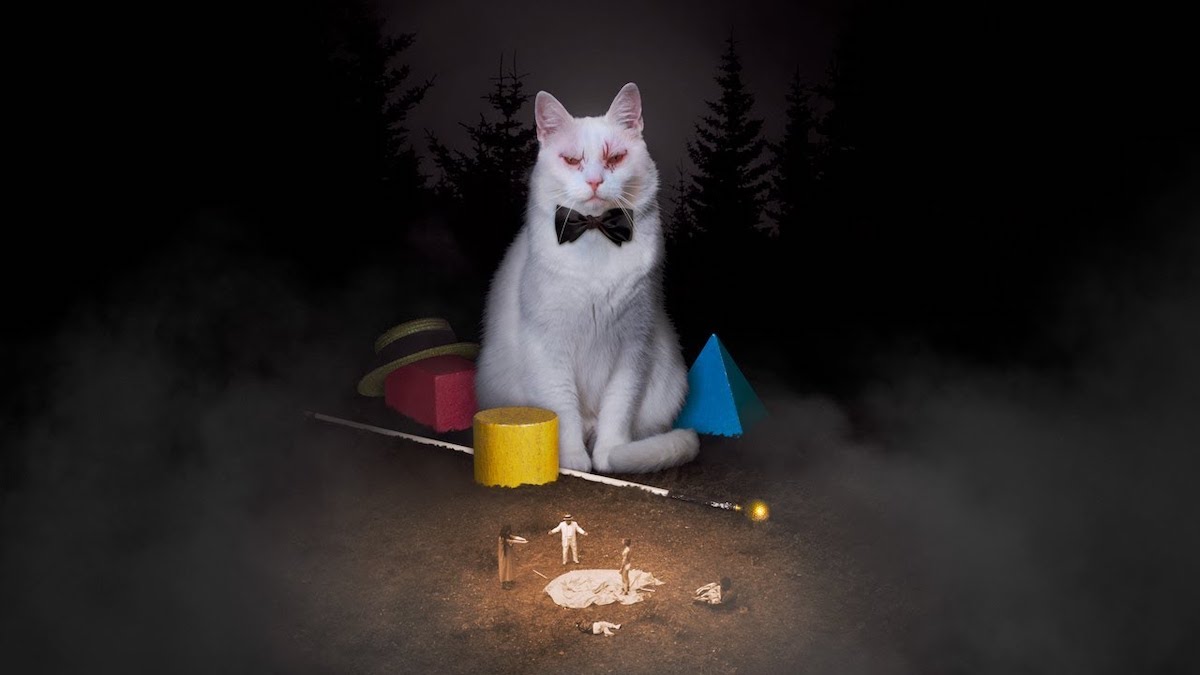 The Wikipedia entry for Johannes Nyholm’s second feature film describes it as a ‘surrealist dark fantasy psychological horror drama’. Which is another way of saying it’s really, really weird. Groundhog Day by way of what you might imagine a David Lynch slasher flick would look and feel like, the time looping narrative sees grieving couple Elin and Tobias murdered again and again at the hands of three eccentric psychopaths, locked in a constantly restarting battle for their very own existence. It’s a perversely beautiful, literalized take on facing your demons, Elin and Tobias’s torment acting as a hallucinogenic metaphor for freeing themselves from the grip of a lasting depression, one brought about by the death of their eight-year-old daughter. Spiked with moments of unexpected slapstick and gruesome horror, Koko-di Koko-da might be interpreted as pure nihilism, yet Nyholm’s film does offer a path out of the deep, dark woods of the human psyche. You just have to be brave enough to follow it.
Available from 7 Sep on BFI Player.

Unhinged
Cheap thrills aplenty in this unashamedly over-the-top thriller, starring a very sweaty Russell Crowe as a very angry man who takes exception to being cut up by a female driver (Caren Pistorius) and proceeds to make her life a stressed-out nightmare. Essentially a cat-and-mouse chase between an emasculated modern male and a frazzled single mum, the iffy gender politics are delivered with a sledgehammer, but you wouldn’t expect anything less from a film that positively revels in its B movie status.
14 to 20 Aug at Red Carpet Cinema, Barton-under-Needwood – https://www.redcarpetcinema.co.uk/FilmDetail.aspx?ID=2375
Until 18 Aug at Everyman Mailbox, Birmingham
– https://www.everymancinema.com/mailbox-birmingham

Summerland
Beginning her career with big budget nonsense like Prince Of Persia: The Sands Of Time and Clash Of The Titans, in recent years Gemma Arterton has looked to prove her thespian mettle with more interesting work. Jessica Swale’s wholesome WWII drama fits that description well, with Arterton’s village loner taking in a young evacuee whilst looking back on a romance with her university friend (Gugu Mbatha-Raw). Arterton really is exceptional, giving a potentially cliche-riddled story an unexpected emotional resonance.
14 to 20 Aug at Bonington Theatre, Nottingham – https://www.boningtontheatre.co.uk/whatson/event/new-release-summerland-12a.php
20 Aug at Everyman Mailbox, Birmingham – https://www.everymancinema.com/mailbox-birmingham
21 to 27 Aug at Wellington Orbit – https://wellingtonorbit.co.uk/
Until 25 Aug at Red Carpet Cinema, Barton-under-Needwood – https://www.redcarpetcinema.co.uk/FilmSearch.aspx

Socrates
When his mother dies, a Brazilian teenager fights for survival in Alexandre Moratto’s sterling debut. Starring a number of non-professional actors and made by a crew of students taken from a UNICEF-sponsored group for at-risk teenagers, Socrates has an air of authenticity about it that few films can match. Christian Malheiros is quite the find in the central role, bringing a soulful tenderness to his performance as he searches for a father he doesn’t know and explores his sexuality in a region rife with homophobia. Socrates might be only just over an hour long, but Moratto makes every minute count.
Available from 21 Aug on Curzon Home Cinema

Tenet
Whilst classic films and relatively fresh releases have helped cinemas slowly reopen their doors over the past few weeks, the industry has been desperate for that one exciting new release which can only be seen on the big screen to really entice audiences back. And here it is – the latest mind-bending, time-twisting blockbuster from Christopher Nolan, a director who has consistently supported the cinema experience. Shrouded in secrecy and packed full of gigantic set-pieces tailor made for massive screens, Tenet was never going to be dumped onto a streaming service. This is a film made for cinemas. And maybe a film made to save them too.
Screening in cinemas nationwide from 26 Aug

I’m Thinking Of Ending Things
Charlie Kaufman might have recently dabbled in literature with his doorstop-sized novel Antkind, but it’s another book that brings him back to directing for the screen – namely Iain Reid’s acclaimed psychological thriller, adapted here for Netflix. Starring Jesse Plemons, Toni Collette and Jessie Buckley, the seemingly simple narrative of a young woman visiting her boyfriend’s parents on their remote farm soon plunges down a typical Kaufman rabbit hole, one full of strange twists, surreal repetition and lashings of existential dread. Available from 4 Sep on Netflix

The Painted Bird
Prepare yourself. Based on a controversial 1965 novel, Václav Marhoul’s WWII odyssey The Painted Bird is a near three hour barrage of misery, desolation and evil acts, as a Jewish boy travels across Central Europe, stumbling from one awful event to another. Don’t write this off as misery porn, though. There is beauty to be found in the midst of the squalid grotesquery, and the film’s final scene offers the briefest glimmer of hope at the end of a gruelling journey, one which Marhoul renders in the starkest of black and white imagery. A stunning work, but perhaps not one you’ll look to revisit.
Available from 11 Sep on BFI Player, Amazon Prime and Curzon Home Cinema.

ONE OFFS AND SPECIAL EVENTS

SPOTLIGHT
Switching the projectors back on

For cinema operators in England, July 4th was meant to be a red letter day. That was the date cinemas were given the go-ahead to reopen under government guidelines, following months of closure due to the ongoing global pandemic. Yet for lots of venues, it’s not been so simple. Whilst some cinemas are already up and running, with social distancing still in place, the numbers just don’t add up for many places, meaning they’re still waiting to welcome back audiences.

One of those venues is the Light House in Wolverhampton. Before the pandemic hit, audience numbers were at a recent high, but this important part of the Midlands’ cultural landscape faces an uncertain future. Emergency funding has been crucial for its survival, but plans for an early September opening have been put on hold as chief executive Kelly Jeffs and her team work out the best way to reopen the Light House without putting the business further at risk.

‘We received a grant from the local authority,’ says Jeffs, ‘plus we sourced a bounce back loan and the BFI have supported some ongoing fixed costs. All these pots have been absolutely critical in bridging the gap of suddenly having zero income. But this situation is going on longer and longer. So far we are projecting a loss of turnover of around 280,000 pounds over the last four months. The pots of money have been helpful, of course, but compared to the loss of income, it’s nowhere near a replacement.’

Just as hard is putting together a tempting film programme to entice cautious audience members. Big new films keep getting bumped to 2021 by worried studios, ‘so trying to put together a quality and exciting programme for audiences to come back to is like trying to plait fog at the moment.’ Jeffs is also concerned about when exactly older audience members will feel safe to return. ‘I am worried that some of our loyal members may not return for the foreseeable future, and that’s totally understandable. But that will only make us work harder than we already do to encourage younger audiences to engage with us.’

But while Jeffs can only make predictions about the future, over at the Bonington Theatre in Nottingham – one of the few Midlands venues to have already reopened – they already have an idea of how audiences are responding. Usually offering a mix of film screenings and live performances, pandemic restrictions on live events mean that the council-run Bonington is, for now, solely a cinema. ‘It’s been fairly smooth sailing so far,’ says assistant theatre manager Jeremy Arblaster. ‘We have a very supportive audience in general and it’s been really nice to see lots of familiar faces come back. There’s been a level of caution, but we’re getting a lot of repeat bookers now. We spent a while getting the safety measures in place, so our hard work has really paid off.’

Talking about those safety measures, it becomes clear just how limiting social distancing can be for smaller venues like the Bonington. They might be open, but they’re nowhere near full capacity. ‘We’ve gone from 178 tiered seats to just 24 seats, with chairs and sofas all on the same level, spaced two metres apart.’ And what of the audience numbers? ‘The numbers have been a bit lower than we expected, but we did have a few sell outs in the first month. Whilst a sell-out is only 24 people, what that told us was there certainly is an audience out there. And we’re already seeing people book for the new releases, which is encouraging.’

What’s clear is that getting audiences back will be a long process, one hampered further by the changing media landscape. With cinemas closed, companies like Disney have sent big family films like Artemis Fowl and Mulan direct to streaming services. Yet Jeffs makes a salient point, namely that ‘not everyone has access to streaming services’ like Netflix and Disney+. To lots of people, venues like the Bonington Theatre and the Light House aren’t just places where they can sit and watch a film – they are essential parts of their communities. ‘For many customers, it’s not just ‘watch the film and go home,’ says Jeffs. ‘They come to meet friends here, socialise and spend time talking about the film they’ve just experienced.’

It’s worth remembering that. For all the media focus on big corporations battling it out over intellectual property, the real battle over the next year and beyond will be for something entirely different. There’s no question that the films themselves are the lifeblood of moviegoing – but the real soul of cinema lies with the people watching them.

SHORT OF THE MONTH

OUT ON THE FIELD

Undeterred by lockdown, Birmingham-based one-man film industry Idriss Assoumanou recently released three shorts in the space of a month. This is our pick of the bunch, a 5-minute drama filmed in Sandwell Valley Park shortly after restrictions eased. Limited by the guidance to a six-person crew, Assoumanou ended up wearing multiple hats including DoP, producer and props master, and the result is an economical blend of humour and creepiness. (Also includes some swearing.)