Luxury cabin in the countryside less than 1 hour from Birmingham 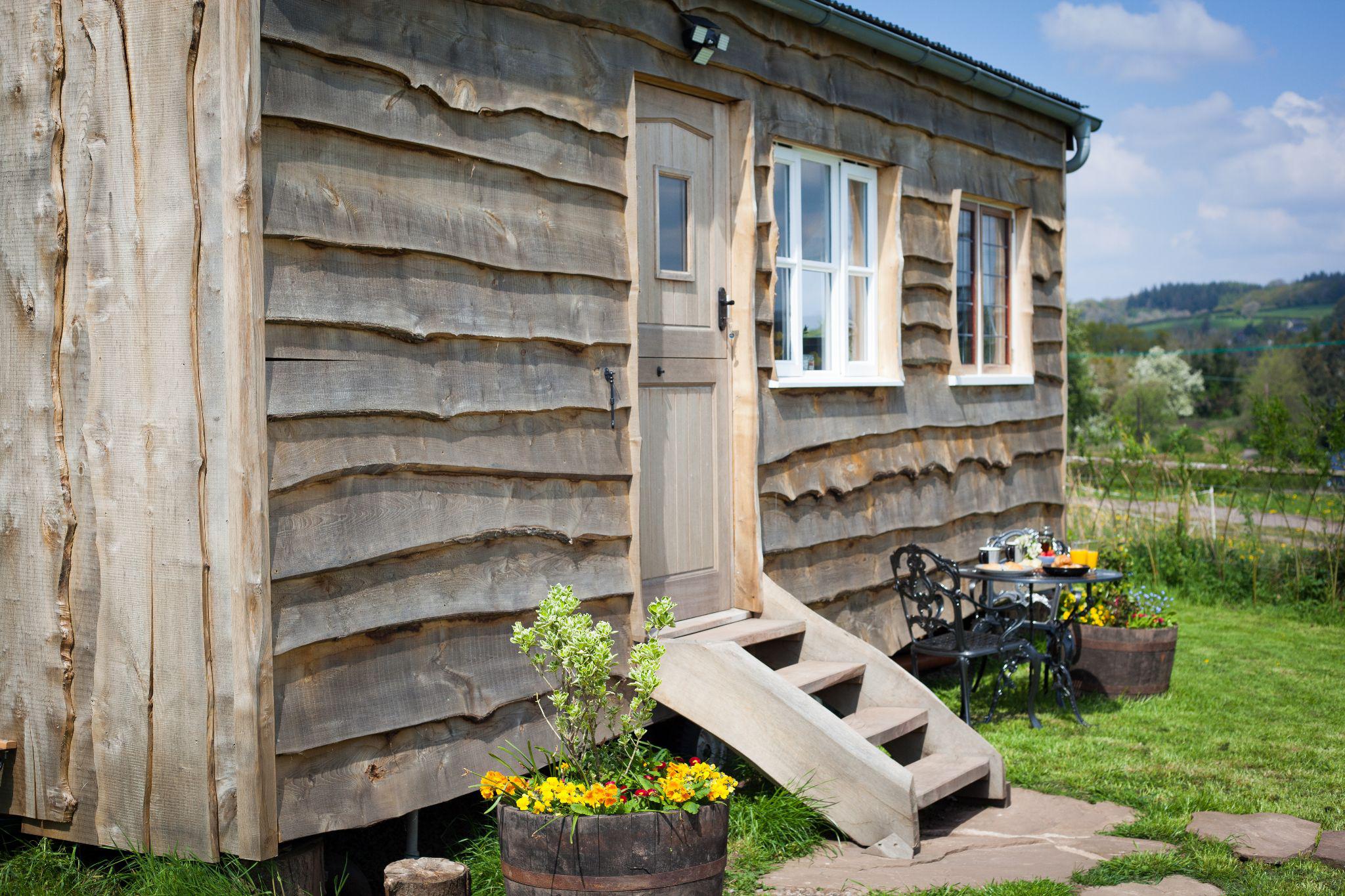 If a short break in a luxurious cabin, surrounded by nature with a spectacular view across Gloucestershire, Herefordshire and parts of Wales sounds far-fetched and too far away for you. The fact that The Queen Bee Cabin in Herefordshire is less than one hour away from Birmingham should grab your attention.

Described as a one of a kind, handbuilt, eco tiny house, The Queen Bee Cabin is indeed unique. On seeing it, the first thing to catch your attention is the sweet chestnut cladding, with live edge, a sharp contrast with typical tin cladding used for cabin and shepherd’ huts.

Go up the 4 steps that lead into the cabin, and you are transported to an indescribable fantasy-like interior, with magnificent hand-carved oak beams that form the cornerstone, should that be corner beams of this wood-rich cabin. Each of the four hand-carved beams divides the cabin into four logical sections: the bedroom, living space, kitchen and the bathroom. Whether you have been in an oak-framed building before or the cornish oak in The Queen Bee cabin is your first oak-framed structure, the four oak beams that dominate every corner of this cabin will catch your attention immediately.

Once you get past admiring the oak beams, the next knock-your-eyes-out item in the cabin is the copper effect wall in the kitchen area. It gives the 4-burner hob a rather majestic ambiance, which makes cooking in the little kitchen area a pleasure.

Though the cabin is called The Queen Bee, it does not completely neglect a king. The sleeping area boasts a king-size bed. Unusual for a cabin, the two people sleeping on the bed can get into it, without having to climb over each other. One thing you will not be short of, regardless of where in the cabin you are, is a great view!

In the sleeping area, you can look through the side window over a field, a barn into Little Birch, the nearest village. When you look out of the main window, you will be looking into the beautiful Athelstan’s wood.

Looking out of the second window gives you the best views of all, a vista that takes in May Hill in Gloucestershire from the left, culminating in the views into parts of Wales on the right.

Even when the weather is bad, the cabin is good

A double rainbow, photographed from the cabin by a guest

Given how quickly British weather changes, even in the middle of summer, you can have a downpour that could last days. What are you to do in a cabin? The hypothetical sounding scenarios happened to a guest at the cabin. She reported undiminished satisfaction with the cabin and took spectacular pictures of the cabin windows, including the above picture of a double rainbow.

With a warm cozy underfloor heating, a kitchen to cook, a wifi to connect with the outside world and a small library of over 100 books the cabin is a fantastic space to be in any weather.

A walk in Athelstan wood, one of many walks from the cabin

If you like walking in the woods, you will be spoilt for choice when you stay in the cabin. The most interesting walk will probably be a walk in Athelstan’s wood. You can see this lovely wood from the cabin. A walk from the cabin via country lanes takes you to the wood, which is one of a number of woods in the area owned by the Duchy of Cornwall.

Getting there from Birmingham

Depending on what part of Birmingham you are traveling from, you could be in Much Birch, South Herefordshire where the queen bee cabin is located in less than one hour. Once you get on the M5, join the M50, a short drive on the A49 and you are more or less there.

Like all hospitality establishments, staying at the Queen Bee cabin depends on the time of the year, how many nights you are staying and other factors. The best way to get a pricing is by visiting the Book a stay at the queen bee page. There is a discount of up to 20% for bookings up to 5 nights or more.

Find out more information about the cabin, availability and other information via The Queen Bee Cabin Facebook page.