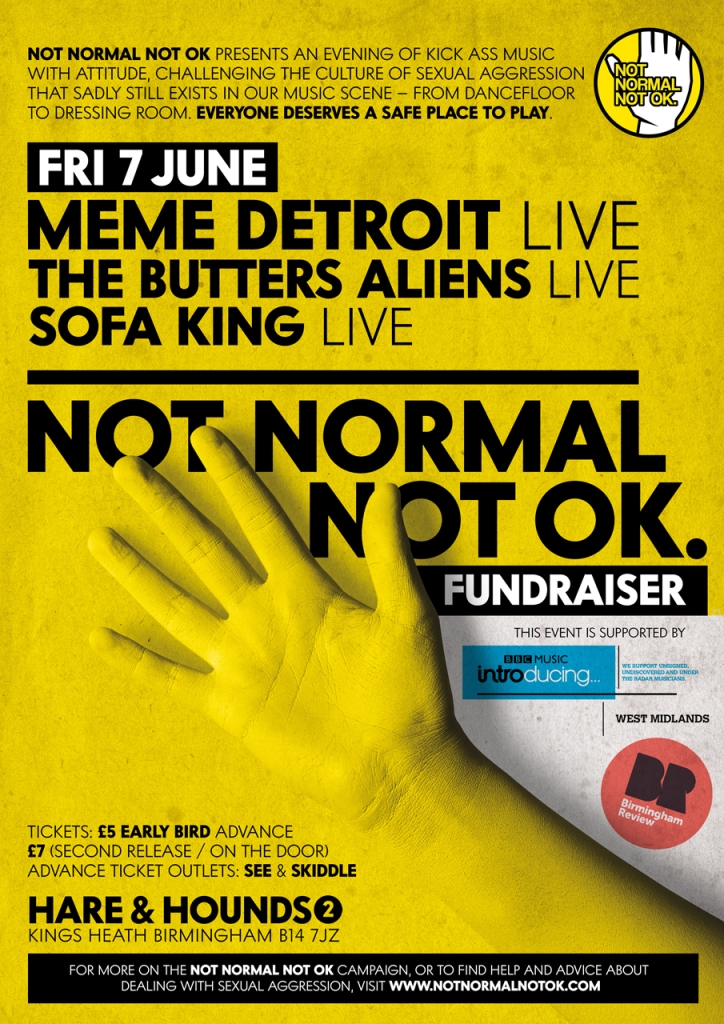 In the coming, months a series out outreach activities will take place at music venues across the city as part of the NOT NORMAL NOT OK campaign. The first is a series of branded stickers, which people can wear when attending live music venues, gigs, and events, to show that they support the message of the NOT NORMAL NOT OK campaign and will speak out against sexual assault and aggression.

NOT NORMAL NOT OK stickers can be issued to anyone who wants to wear them whilst attending live music venues and events. Email info@notnormalnotok.com and a sheet of 30 stickers will be mailed to any address in the West Midlands free of charge. Live music venues and promoters can receive a larger number of stickers, if they want to distribute them to people attending at working at live music events.

With a mandate to ‘encourage safety and respect within live music venues’, the NOT NORMAL NOT OK campaign will ‘combat the culture of sexual assault and aggression – from dance floor to dressing room’.

From people being ‘groped’ or sexually assaulted whilst in a crowded venue, to cases of more direct sexual violence and rape, a significant number of people are still suffering from sexual violence in Birmingham’s live music venues. And whilst each live music venue will have their own duty of care, enforced by SIA trained security and venue operators, many cases are still not being reported or fully challenged as they occur.

The NOT NORMAL NOT OK campaign supports the ‘existing avenues of support’ in Birmingham’s live music venues, whilst ‘encouraging people attending events to both look and speak out for each other.’

“NOT NORMAL NOT OK is about saying, in a strong, clear, and collective voice, that sexual assault in live music venues will not be tolerated,” says Ed King, Editor-in-Chief of Review Publishing, who set up the campaign with help from West Midlands Police and RSVP.

A staggering number of people, both male and female,” continues King, “are still suffering from sexual aggression in the city’s live music venues – from being sexually assaulted in audiences and crowded venues, having their drinks spiked with sedatives and ‘date rape drugs’, to cases of direct rape and sexual violence, and in no simpler terms it just needs to stop.

Emily Doyle, bass player for The Hungry Ghosts – a prominent local alternative rock group, and the designer of the NOT NORMAL NOT OK logo, says:

in 2018, sexual assault is still an issue within live music venues in Birmingham.

Venues are working to tackle it. This campaign is there to support that, and not challenge the work they have to do. That said, we all need to get send a clear message that sexual assault will not be tolerated within our music scene. It’s sad to have to say it, but too many people have got away with sexually aggressive and violent behaviour for too long. It stops now.

the culture of sexual assault and aggression is prevalent in local live music venues, both in the crowds that attend the gigs and the industry that promote them.

But we can stop it; we must stop it. If everyone gets behind this message, and starts to tackle sexual aggression head on, I’m confident we’ll start to see some real change and make live music venues across the city a safer place to be.

We are really pleased NOT NORMAL NOT OK have approached us to work with them to address sexual harassment and abuse within the live music scene in Birmingham. No one should be subjected to abusive behaviour and I would strongly urge victims to report directly to us, or via Crimestoppers. We take all reports of sexual abuse seriously and will work with survivors, help get them the support they need, and work with them to bring offenders to justice.

Not Normal Not Ok Friday 7 June Hare and Hounds

Not Normal Not Ok presents and evening of kick ass music with attitude, challenging the culture of sexual aggression that sadly still exists in our music scene – from dance floor to dressing room.

EVERYONE DESERVES A SAFE SPACE TO PLAY

The event partners are: BBC Music Introducing Birmingham Review The Hare and Hounds.

NOT NORMAL NOT OK: